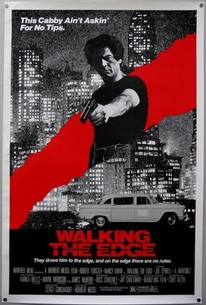 This standard revenge film focuses on Jason (Robert Forster), an L.A. taxi driver and numbers runner drawn into the role of protector and avenger, and Christine (Nancy Kwan), a woman out to get even for the murder of her husband and son. After events lead Jason to harbor Christine at his home in order to protect her from the gangsters who killed her family, he soon wants revenge against the same gangsters himself: they have just tortured and then murdered one of his good friends. As Jason and Christine team up to fight the assassins, gore fills the screen, and vulgar language fills the audio -- a duo that may limit the audience for this tale of vengeance.

A Martinez
as Tony

Howard Honig
as Ron
View All

Critic Reviews for Walking the Edge

There are no critic reviews yet for Walking the Edge. Keep checking Rotten Tomatoes for updates!

Audience Reviews for Walking the Edge

There are no featured audience reviews yet. Click the link below to see what others say about Walking the Edge!