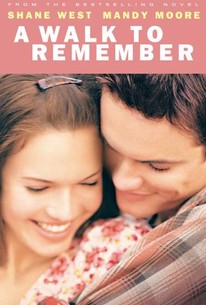 Critics Consensus: Though wholesome, the Mandy Moore vehicle A Walk to Remember is also bland and oppressively syrupy.

Critics Consensus: Though wholesome, the Mandy Moore vehicle A Walk to Remember is also bland and oppressively syrupy.

Critic Consensus: Though wholesome, the Mandy Moore vehicle A Walk to Remember is also bland and oppressively syrupy.

A Walk to Remember Photos

The best-seller by sentimental novelist Nicholas Sparks becomes this teen melodrama set in a coastal North Carolina port. Cocky, popular high school student Landon Carter (Shane West) is the big man on campus at Beaufort High School until a hazing incident leaves a fellow student paralyzed. Sentenced to community service and membership in his school's drama club, Landon is forced to seek help from Jamie Sullivan (pop singer Mandy Moore), the conservative, religious, plain-Jane daughter of the town's Baptist minister (Peter Coyote). When the two students begin to fall in love, Landon struggles with the drop in popularity that his new friendship brings, while Jamie is forced to deal with her strict father and a secret that she's keeping from her schoolmates. A Walk to Remember, which co-stars Daryl Hannah, is the second of Sparks's novels to make it to the big screen after Message in a Bottle (1999). ~ Karl Williams, Rovi

Critic Reviews for A Walk to Remember

This realist fairy tale of impossible love has a fair amount of nuance and charm.

It's an overwrought teen weepy, Terms of Endearment for the TRL crowd.

An adolescent romance we've seen a million times before.

This horrific teen romance-cum-weepie is best watched from between your fingers, or from under your seat, or perhaps standing outside the cinema looking in the opposite direction.

Mandy Moore only has herself to blame for choosing such a tooth-rottingly sentimental weepie as this.

It's sad that Moore's first major cinematic outing scrapes the bottom of the melodramatic barrel.

Adopts a breezy anti-cynicism as a pose, and then spends the rest of the time failing in the most spectacular way to competently execute it.

This is a great romantic tearjerker.

A shameless, compassionate tearjerker about hope, inspiration and courage.

For anyone under 13, free from cynicism and with a need to believe that 17 year-old boys aren't just after one thing, maybe this film rocks.

Succeeds modestly as a teen movie. Expect anything else from it and you'll be disappointed.

Audience Reviews for A Walk to Remember

I have watched this many times over the years. It is the only Nicholas Sparks story I actually like. Both Mandy and Shane are perfect here. I love the songs, too. Mandy's voice is beautiful.

I saw "A Walk to Remember" for the second time today. I have to give it more respect that I did the first time I saw it. Sure it is mushy or corny, but I always have hope after seeing a movie like this that people can change or grow for the better. If you are a romantic, this is the movie for you. But it is difficult to watch without an odd tear welling in your eyes.

I truly cared to see A Walk to Remember, until I absolutely had to, or forced to. I had read many things on this film, some good, and some bad. Mostly bad. The film was surprisingly decent, nothing great or anything good. But decent. I felt that it was an interesting enough film to watch. Nothing more. The film didn't have awful acting, as I'd expect it to have and I liked that the guy who was basically an asshole because he was one of the "popular cool kids" decided to change because he met a girl that was kinder than most of his friends. There is an average story going on here, but as a person who normally doesn't like romance films, I thought that A Walk to Remember was very decent. There are things that could've been done better, but this isn't too bad of a film. I didn't think the ending was all that sad either. I know that sounds cold, but I just didn't feel anything. How ever I do admire some of the issues displayed in this film, and it did have a heart. I thought it was a decent film for what it was. Though it has plenty of flaws, A Walk to Remember is an entertaining film that wasn't all bad. Sure it touches on the clichéd love story aspects, and it's meant as a teen romance film. But they could've done slightly better. One of the reasons this isn't utter trash is because of Mandy Moore's fairly good performance here. Overall a decent little film, but nothing truly memorable or great on screen.

One of the most heartbreaking films I've ever watched. Mandy Moore and Shane West make a great couple and the ending was poignant and perfect.

A Walk to Remember Quotes