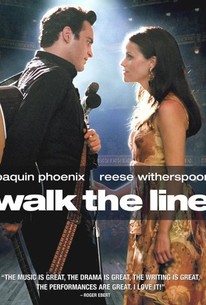 Critics Consensus: Superior acting and authentic crooning capture the emotional subtleties of the legend of Johnny Cash with a freshness that is a pleasure to watch.

Critics Consensus: Superior acting and authentic crooning capture the emotional subtleties of the legend of Johnny Cash with a freshness that is a pleasure to watch.

Critic Consensus: Superior acting and authentic crooning capture the emotional subtleties of the legend of Johnny Cash with a freshness that is a pleasure to watch.

"Walk the Line" follows the early years in the career of American music legend Johnny Cash. The young Cash sets out on life's journey battered by his brother's accidental death and an abusive father, who blames him for the incident. His rise to fame with such hits as "A Boy Named Sue" and "Ring of Fire" is countered by his struggle with amphetamines, barbiturates and alcohol. His instability, both financial and emotional, leads to the failure of his first marriage. The few comforts of his unhappy youth had come from the radio programs of June Carter, the luminous daughter of country music's first family. When their paths cross, it's her devotion and support that becomes his salvation.

Lucas Till
as Young Jack Cash

Wyatt Entrekin
as Tommy Cash at 5

Davielle Boyce
as Maid at Door

Natalie Canerday
as Lady in the Aisle

News & Interviews for Walk the Line

View All Walk the Line News

Critic Reviews for Walk the Line

Walk the Line -- although conspicuously well acted -- is really no different from previous efforts, and that's a good thing. It shares the charm of the (musical biopic) genre.

I advise you catch up with Walk the Line, if only for Ms. Witherspoon's transcendent joyousness as a still-growing legend within a legend.

Mangold was wisely generous with the amount of musical performance he included in the film, and the later scenes -- showing Cash and Carter as partners -- are so well shot and edited, they defy you to sit still.

If Walk the Line isn't the full story of Johnny Cash, it's at least a crucial corner of it, a way of coaxing a legend down to a human scale, without shrinking that legend away to nothingness.

Phoenix is terrific in Walk the Line - - the actor's taciturn, brooding persona dovetails beautifully with the role - - but it's his scenes opposite Witherspoon that give the movie its real spark.

A Johnny Cash biopic equally packed with music and frustrated love, Walk the Line goes from compelling to enthralling.

I love this movie so much.

The film boasts of extremely competent performances, particularly the extraordinary Phoenix. As for Witherspoon, with her nasal twang and perky persona, she is sweet and sassy...

Not only does the film show just how hungry Cash was to sing his songs, it understands how hungry society was for the cataclysmic changes such music brought.

It's a tidy Hollywood arc imposed on a messy real life, but it gets the job done.

the acting compensates for the weaknesses in the script

What made this film work, and what ultimately won it most of its acclaim, were the performances of the actors.

Audience Reviews for Walk the Line

Assuming the movie is an accurate portrayal of Johnny Cash, it is worth watching just to learn move about the music legend. The only problem is that Joaquin Phoenix can't really sing, but then neither could Mr. Cash.

Better than most biopics and superbly acted by the leads.

Musicals are not my cup of tea, but I decided to give it a go for it's based on real life. As expected, the movie turned out to be a disappointment. Thanks to my holy ignorance, I'd not heard of the protagonist ever before, but his story seemed familiar. It was like watching a modern version of Devdas. Only that this one has a happy ending. [I grant you the permission to differ for now.] Having said all that, it's still watchable with one finger on the fast-forward button.