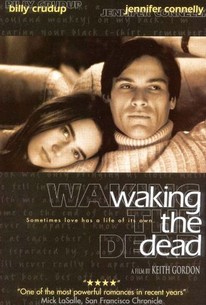 A man finds his melancholy turning to madness in this thriller. Young lawyer Fielding Pierce (Billy Crudup) has just thrown his hat in the ring for an upcoming congressional election. He has also been haunted by the memory of his girlfriend Sarah (Jennifer Connelly), who recently died in a car bombing -- and haunted not just figuratively but literally: he's seeing apparitions of Sarah everywhere, and he's starting to wonder if she's really there or if he's going mad. Waking the Dead is based on a novel by Scott Spencer, who also wrote Endless Love, and directed by actor-turned-filmmaker Keith Gordon.

Don Jordan
as Minister with Bertelli on TV

Scott Spencer
as Man with Sarah in Flashback

Alan Fawcett
as Reporter at Restaurant

Leah King Pinsent
as Reporter from Fielding's Past

Ed Cambridge
as Old Man from Letter
View All

Critic Reviews for Waking the Dead

You can embrace this movie's message, which has less to do with political agendas than basic human decency and the enduring power of love. And if that's not enough to make a film worthwhile, we don't know what is.

Waking the Dead may put you to sleep.

A powerful story of love and politics.

As shrill as its heroine.

It's a good fit for anyone who loves fine acting.

Crudup and Connelly outperform the material.

Waking the Dead is D.O.A., and none of its manifest good intentions are capable of resuscitating it.

An enticingly adult drama that frustratingly loses the nerve to follow its richest threads.

Connely's great, but Crudup's a revelation in this serious and sobering romantic tragedy.

As boring as batshit

I really liked the fragmented structure and was impressed as usual by Billy Crudup.

Audience Reviews for Waking the Dead

This film was heavy, that's for sure. I thought the nonlinear storyline was effective. Visually this film won me over. The imagery was starkly beautiful, lighting was used to great effect; sometimes to provide warmth at other times to make a room uncomfortably bright. It reminds me of the Constant Gardener, the version that would have unfolded if the man hadn't sought answers to his partner's death. What would've happened if he had tried to simply move on with his life.

I kick myself for actually liking this movie. Billy Crudup is understatedly wonderful. This is how the terrible book should've been paced.

I loved the dichotomy of Waking the Dead's story right off the bat - part political flick, part romance, part ghost mystery? Interesting roots, but sadly the movie most often plays to its obvious avenues, and where there should have been atmosphere and melancholy there instead exists cliche. The problem is that the crux of Waking the Dead, its love story, is the weakest part. Fielding and Sarah are good characters, but there's something missing - a lack of focus on the couple's good times, I think. They spend a lot of their time together locked in political repartee, which generally ends in some personal barb and all parties involved being pissed off or upset. They should just gone out for ice cream or roller bladed or something; you know, a tether to prove that these people ACTUALLY liked each other. Without it, the final moments of the movie kind of fall flat, and turns a movie that could have been genuinely affecting into something strong, if not forgettable. There's no denying that it is a strongly written movie, literate and full of governmental allegory. The lead performances are equally excellent, though Billy Crudup occasionally trips up on the admittedly dense dialogue. Unfortunately, it's just not enough - the movie spends too much time on Fielding's uninteresting campaign when it should be showing us more about the relationship that was taken away from him. Show us what he's missing.

I rented it for Conelly. Ended up hittin the old fast forward button so I could redeem my precious life lost.