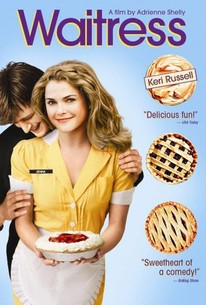 Critics Consensus: Sweet, smart, and quirky, Waitress hits the right, bittersweet notes through this romantic comedy through its witty script and a superb performance by Keri Russell.

Critics Consensus: Sweet, smart, and quirky, Waitress hits the right, bittersweet notes through this romantic comedy through its witty script and a superb performance by Keri Russell.

Critic Consensus: Sweet, smart, and quirky, Waitress hits the right, bittersweet notes through this romantic comedy through its witty script and a superb performance by Keri Russell.

A woman trapped in a life from which she dreams of escape, Jenna's secretly hopes to save enough money from her waitressing job to leave her overbearing and controlling husband. She is a sharp, sassy woman with a gift for making unusual pies whose recipes are inspired by the trials, tribulations and circumstances of her life. An unwanted pregnancy changes the course of events giving her an unexpected confidence via letters to her unborn baby.

Eleya Avery-Ault
as Toddler in Diner

Jesse Schneider
as Toddler in Diner

Zoe Schneider
as Toddler in Diner

Elaine Levine
as Pie-Contest Woman No.1

Doreen Powell
as Pie-Contest Woman No.2

Nora Paradiso
as Ethel
View All

Shelly deftly achieves a tone pitched between fantasy and reality, its levity belying an astute and humane study of an unhappy relationship steeped in inertia.

The film is hardly flawless - even the pie-baking scenes sometimes seem half-baked - but it's hard not to read promise into every frame, and to wonder what Shelly might have cooked up in the future.

Waitress is not a perfectly cut, factory-line Safeway-brand slice. It does, though, serve up a generous deep-dish portion, homemade and heartfelt, that leaves a sweet taste goes down.

The sunniness of its tone is so disarming that it keeps you onside no matter what.

The pies themselves, produced in all the colours of a rainbow - look disgustingly plastic.

The experience is enjoyable but bittersweet, because Waitress will leave you with a taste for more.

This little movie's got a lot of heart, and it's a heart that's unafraid to embrace life's littlest moments in all its forms.

...genuinely, genially funny and carries a modestly affirming moral: You have to make yourself happy and you have to be able to live with yourself.

Essentially a king-size serving of sitcom

Allergic as I am to quirkiness, I was won over

A bittersweet film but smartly done. Worth watching.

Waitress is a charming, gentle, often dark yet extremely quirky comedy. It feels even darker since the subsequent murder of its writer/director/supporting actor Adrienne Shelley who didn't live to see the film's release. Anchored with a lovely, subtle sad eyed performance by the beautiful Keri Russell and a cast of terrific comedic prodigy actors, including the great Andy Griffith in his last film appearance as the crusty diner owner. It's a singular, meaningful and poetic comedy, despite its light touch and tone. It's the apparently simple story of Jenna, small town southern waitress, with a god given talent for creating original and delicious pies. Stuck in a horrible marriage with an idiot husband, Jenna's saving money so she can bolt - until she finds out she's pregnant. She falls into a hopeless intense affair with a married young doctor, played with customary charm and intelligence by TV's own Cary Grant, Nathan Fillion. That's about the whole story, the stakes keep getting raised higher as the doctor and the waitress carry on an increasingly steamy affair just as her belly gets bigger and her husband gets more demanding and abusive. The pies are a terrific touch, because the recipes are thematically related to the beats of the story (i.e. I hate my husband pie, crushed lumpy oatmeal and sour cherries, etc.). The making of the pies is shot gorgeously and, amazingly this device never gets tired. I forced myself to watch this, because on paper, it looks like a cliched, gratuitously offbeat comedy full of faux folksiness and bad southern accents. It's far better than that. Director Shelley and Cheryl Hines play her fellow waitresses with verve and spunk, and Jeremy Sisto as the abusive husband may be stupid, but he's an identifiable human being, not a cliched villain, who evokes our empathy, even as we are rooting for Jenna to get the hell out of the marriage. On the DVD extras, the cast all rhapsodize about Shelley's having such a clear vision of what she wanted and how she was a control freak for every aspect of this production. That is palpably true, and it's a tragedy that she didn't get to make more films. See this one, you'll be happy.

Our world needs a few feel-good movies, and 'Waitress' fits the bill. Earl (why are Southern bad guys always called Earl?) needs to be taught a lesson, and Jenna finds a way to accomplish that.

Well seems I'm the only person who didn't like this?! I thought it was a Rom-Com but it's more of a Rom-Drama. Quite weird and quirky, I just found it painfully slow, long and a bit boring. The 2nd half isn't too bad but the film didn't need any where near the run time. I would say it's most like The good girl with Jennifer Aniston but I enjoyed that more than this.