Waiting for the Barbarians2020 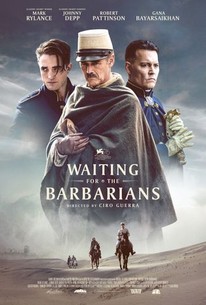 Critics Consensus: Admirable in theory but disappointing in execution, Waiting for the Barbarians struggles to turn strong performances and worthy themes into affecting drama.

Critics Consensus: Admirable in theory but disappointing in execution, Waiting for the Barbarians struggles to turn strong performances and worthy themes into affecting drama.

Critic Consensus: Admirable in theory but disappointing in execution, Waiting for the Barbarians struggles to turn strong performances and worthy themes into affecting drama.

Waiting for the Barbarians Videos

Waiting for the Barbarians Photos

The Magistrate (Mark Rylance) of an isolated frontier settlement on the border of an unnamed empire looks forward to an easy retirement until the arrival of Colonel Joll (Johnny Depp), whose task it is to report on the activities of the 'barbarians' and on the security situation on the border. Joll conducts a series of ruthless interrogations, which leads the Magistrate to question his loyalty to the empire. Adapted by Nobel Prize winning author J.M. Coetzee from his own book, Directed by Ciro Guerra, co-starring Robert Pattinson.

Mark Rylance
as The Magistrate

Gana Bayarsaikhan
as The Girl

David Dencik
as The Clerk

Sam Reid
as The Lieutenant
View All

Critic Reviews for Waiting for the Barbarians

This is proficient, measured filmmaking from a director who has already peered more deeply, and persuasively, into colonialism's heart of darkness.

Despite its nostalgic trappings, the film, Colombian director Ciro Guerra's English-language debut, soon reveals itself as timely in the extreme: This is a parable of the good cop.

Despite the sincerity that's in every scene with Rylance's performance, the movie's good intentions remain wistful, and thoroughly frustrating.

It's a collision of talents, technique and even philosophy: The much-honored Mr. Rylance can be an antidote to actorly artifice; Mr. Depp is a delivery system for eccentricity.

Sparks fly thanks to the star power of Depp, Pattinson and Rylance, but not enough for award-winning Colombian director Ciro Guerra to save this anti-imperialist allegory from the thuddingly obvious.

On a screen, we tend to crave more specificity. The result, coupled with a too-languorous pace, is a film that's intermittently engrossing and always interesting, but less potent than it could have been.

Uneven and sometimes a little rigid, this adaptation of J. M. Coetzee's 1980 novel eventually finds its footing through several forceful performances, some gorgeous passages, and its relevant themes.

A powerful drama about the toxins spread by rumors of war.

'Waiting for the Barbarians' is a grim morality tale.

Guerra continues to explore the brutality of imperialism in his first feature film in English. A contemplative tale commanded by Mark Rylance's nuanced performance. [Full Review in Spanish]

The cast, director , writer, and cinematographer are all impressive so why does this movie feel so off the mark?

There are no featured reviews for Waiting for the Barbarians at this time.

Waiting for the Barbarians Quotes