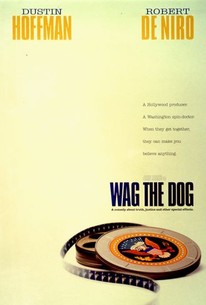 This political satire seems to almost predict the events in the Clinton sex scandal. After the President is caught with a Girl Scout, he hires a Hollywood producer to create a fake war and bring home a fictionalized war-hero to gain support. Problems arise when the insane war-hero dies.

Maurice Woods
as Kid With Shoes

Pops Staples
as Himself

Stephanie Kemp
as Aide No. 1

Jack Esformes
as Aide No. 2

Michael Reid Davis
as Aide No. 4

Merle Haggard
as Himself

Jim Belushi
as Himself

Cliff B. Howard
as Ranger

Furley Lumpkin
as Raking Dad No. 1

Sean Fenton
as Raking Dad No. 2

John Franklin
as Jockey No. 1

Kevin Furlong
as Jockey No. 2

Terry Anzur
as Female Announcer No. 3

Richard Saxton
as Chicago Newscaster No. 2

Geffrey Blake
as Media Guy No. 1

Jerry Levine
as Media Guy No. 2

Bill Handel
as Reporter No. 7

News & Interviews for Wag the Dog

View All Wag the Dog News

Critic Reviews for Wag the Dog

Hilary Henkin and David Mamet's script is gleefully hyperbolic without ever straying from its political target.

Lazily assembled by director Levinson, it slides into a series of soft, extended skits on engineering a media war, not helped by several badly handled leaps in the story.

Amusing as it is, Wag The Dog does what it purports to sat irize -- the bark is real but the teeth aren't.

A wicked smart satire on the interlocking worlds of politics and show business, Wag the Dog confirms every awful thought you've ever had about media manipulation and the gullibility of the American public.

The pacing is crisp, the dialogue quippy and fast, the tone arch but energetic.

...a fairly static drama that contains few elements worth connecting to or wholeheartedly embracing...

If anything, in the years since its release, the worlds of politics, entertainment, and news media have grown even more intertwined in which narratives are carefully controlled and expectations are minimal.

'Wag the Dog,' a movie that's fun to see more than once, comes across as a bitingly funny satire of politics, the media and show business.

Anyone who would be inherently interested in this kind of sendup is unlikely to be surprised by anything in this film -- overall it feels like a trifle, if an entertaining one.

Audience Reviews for Wag the Dog

This eccentric little dark comedy was perfectly timed upon its release, a year before the Clinton affair went public. The film deals with a conspiracy to cover up the POTUS' sex scandal with a younger girl by pretending that there will be a war in Albania, on the eve of the election. The film is very dark, filled with one-off performances by everybody from Woody Harrelson to Willie Nelson, and captures the behind the scenes tension of White House politics. Dustin Hoffman was nominated for Best Actor for this film because his portrayal of Motss is enigmatic. Motss is selfish, egotistical, and without any moral capacity. Robert De Niro is also entertaining, but his character mostly stands at the sidelines, happy to be invisible for the benefit of his job, the opposite of Motss. Overall it's a very solid, if unnerving piece of political satire that tickles the funny bone while revealing the darkness of American politics.

Wag the Dog is an average dark comedy that relies on a great cast and an effective script. Enjoyable, but could have been better, this film is a bit dull at times and suffers from a so-so script. The idea is good, but the result is a decent film that just touches the surface of what it tries to accomplish. The cast were quite good and they clearly try to elevate film's material. This is a decent affair, but it could have been much better than what it turned out to be. I was really looking forward to seeing this one, but I was slightly let down. I expected a much better film than this and though it has a great cast, it never becomes anything truly worthwhile to rewatch again. With its ideas, Wag the Dog could have been a standout feature, but it just ends up being a so0so movie that never really takes off. I thought that there could have been more effort put into this one, and though it is a decent film, it's also quite dull in places and it should have been better. This may appeal to viewers looking for satire, but there are some elements missing to make it the film that it should have been. Enjoyable, but flawed, Wag the Dog is decent fun with a cast that try their best at making this a film watchable experience. The idea makes this film enjoyable, but simply can't shrug off how could this one could have been otherwise. Wag the Dog is fun, and quite decent, but it could have been much better.

"A good plan today is better than a perfect plan tomorrow." Before elections, a spin-doctor and a Hollywood producer join efforts to "fabricate" a war in order to cover-up a presidential sex scandal.

REVIEW
A political spin doctor, Conrad Brean (Robert De Niro), and a Hollywood producer, Stanley Motss (Dustin Hoffman), both well endowed with chutzpah, set out to create the illusion that the USA has gone to war with Albania, as a distraction from a Presidential sexual peccadillo. Made and released before the Clinton-Lewinsky scandal broke, it is not clear whether the movie's makers had great insight, or inside knowledge; either way, that episode adds to the interest and relevance of the film. De Niro and Hoffman are both brilliant, though understandably the latter seems especially to relish lampooning a film-world type he must have encountered many times in his career. Anne Heche is just right as a Presidential aide who previously thought she was streetwise, but faced with Brean and Motss realises she's a tyro in the kiddology game; and Woody Harrelson has a wonderful role as the man picked to play the war hero who just happens to be a psychotic convict. Among the targets of the satire are clearly the US political establishment, the broadcasting media and Hollywood; but there is a danger that the primary target may be overlooked, and it is worthwhile remembering the derivation of the film's title. Normally, the dog wags the tail because the dog's smarter than the tail; but if the tail was smarter, it would wag the dog; and there can be little doubt that the dog being wagged by Brean and Motss is the viewing and voting public.

Two weeks before election day, news gets out that the U.S. President is accused of sexual misconduct with a minor. To divert attention away from the scandal and increase the president's chances of getting re-elected, a top political spin doctor named Conrad Brean (Robert De Niro) enlists the help of a big wig Hollywood producer named Stanley Motss (Dustin Hoffman) to help create a phony war with Albania. It's a smart and funny set up to begin with, but what really gives added edge and humor to this biting satire is that it was in production around the time of Bill Clinton's real life sex scandal, making the material even more relevant, intriguing, and thought provoking. This is some funny stuff (usually of the dark variety though), and it really makes you wonder about what actually goes on behind the scenes in Washington, and if the stuff the media feeds us cocncerning all things politics is legit or just the product of movie magic and trickery. Co-written by David Mamet and Hilary Henkin, and directed by Barry Levinson, this is a solid piece of work with an all star cast including (besides Hoffman and De Niro) Anne Heche, Denis Leary, Willie Nelson, Woody Harrelson, Kirsten Dunst, and Craig T. Nelson. They all deliver some good work, but it's definitely De Niro and Hoffman who steal the show. The film is quite sharp and very well done, but it also feels rather light at times, and it seems a little underwhelming with how it ends. It ended and I was like, "is that it?" So yeah, there's some flaws here, but those aside, this is some terrific stuff, so definitely check it out.