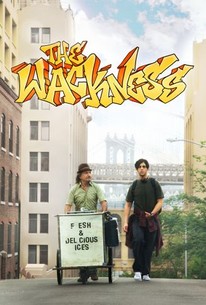 Critics Consensus: Sympathetic characters and a clever script help The Wackness overcome a familiar plot to make for a charming coming-of-age comedy.

Critics Consensus: Sympathetic characters and a clever script help The Wackness overcome a familiar plot to make for a charming coming-of-age comedy.

Critic Consensus: Sympathetic characters and a clever script help The Wackness overcome a familiar plot to make for a charming coming-of-age comedy.

It's the summer of 1994, and the streets of New York are pulsing with hip-hop and wafting with the sweet aroma of marijuana--but change is in the air. The newly-inaugurated mayor, Rudy Giuliani, is beginning to implement his anti-fun initiatives against "crimes" like noisy portable radios, graffiti and public drunkenness. Set against this backdrop, Luke Shapiro spends his last summer before college selling dope throughout New York City, trading it with his shrink for therapy, while crushing on his step-daughter.

Alexander Flores
as Kid in Bar

Douglas J. Aguirre
as Desk Officer in Prison
View All

News & Interviews for The Wackness

View All The Wackness News

Critic Reviews for The Wackness

It muddles through on its period infatuation and on Kingsley's dope-loving turn as a doctor constantly on the verge of another hit.

The Wackness, while no masterpiece, is the kind of film that doesn't come to much but is watchable as it saunters along with a provoking sense of meaningful pessimism. The performances are really the thing - Levine hasn't managed anything better.

The film's forlorn charm is a little reminiscent of Cameron Crowe's adolescent memoir Almost Famous. It's a tiny bit soppy, too, but you can forgive that in a teenager.

Levine's film is often showy, clumsy, over-earnest. But then so are its characters. So is late adolescence. The Wackness carries out the advice Squires gives to Luke - make a mess, embrace pain. In doing so, it ends up anything but wack.

Its writer-director, Jonathan Levine, lavishes the movie with inky black shadows and soft gauzy close-ups, making it mostly feel like a dream, or a half-conjured memory.

What can I say? THE WACKNESS is the most WACKTASTIC, FAN -*$&%ING-TASTIC film of the year!

A pretty standard coming-of-age tale about a boy's last summer of childhood.

As unoriginal and cliché-ridden as Levine's screenplay is, he has taken care in developing some genuinely attractive off the wall characters

Fortunately Peck's diamond acting pulls the film above its murky setting. It takes some courage to be this vulnerable on screen, and Peck is uncommonly good at it.

An exercise in style and wit, two commodities that never go out of fashion.

Audience Reviews for The Wackness

The year is 1994, the place is New York City, and Luke Shapiro, having just graduated high school, tries to spend the summer figuring out what to do with his life, as well as how to deal with all of his various issues. Along the way, he makes his living dealing pot, which also includes trading some of his pot in exchange of clinical help from his psychiatrist Dr. Squires, who also happens to be his only real friend. Things get complicated when Luke starts up a relationship with his doctor's stepdaughter. This is both a coming of age drama (with occasional bits of comedy) and a love letter to the nostalgic days of the 90s. In fact, the film is not very subtle when it coems to reminding the audience that the film is set in 1994. This might be annoying to some, but I rather liked it, but I have a huge love for the 90s, so there. Musically, since this is an urban film, and because the main character is into hip hop, that's what the bulk of the soundtrack is, although there's some nice chestnuts from the 60s and 70s thrown in as well, so that's great. The characters aren't really the most admirable or worthy of being role models, and they aren't always totally likeable or sympathetic, but they are interesting, so that makes watchign a movie about them worthwhile. I couldn't completely relate to this film or the characters in every way, but I found enough similarities to make them somewhat more sympathetic. I liked the lead, but this is one of those movies that is owned by the suporting characters. This film's got an intersting cast, and they all do a pretty decent job (at the very least), especially Ben Kingsley- who really goes off the rails and is rather unrecognizable here as the therapist who is also a drugged out relic yearning for the good old days. Josh Peck is not bad as Luke, but I wasn't blown away by him. Olivia Thirlby, who I liked in Juno, is even better here, giving a sassy and hip performance as the stepdaughter/love interest. In smaller but memorable roles are Method Man as Luke's supplier and Mary-Kate Olsen as one of Luke's customers, a party girl who has a really memorable WTF scene with Sir Ben. Going back to the music for a sec, I think it's interesting to note that this is the second film that Olivia Thirlby has appeared in which features "All the Young Dudes" by Mott The Hoople. Odd. This is a good movie, but not great. It's adequate, but I give it slighly higher marks (admittedly) because I'm a fan of the time period, I like seeing dignified actors play way against type, but do so in dignified ways that don't seem forced. If a movie about angsty bored drug users in the 90s sounds like your type of thing, then give this a watch.

With a great script, interesting characters and excellent performances all round, ''The Wackness'' is a very sweet, uplifting coming-of-age dramedy.

Its 1994, mutha fuckas. thats an accurate summary of this film. hey, people. this movie is set in 1994. did you forget already? and Olsen Twin #2 proves that she is an embarrassment to every mammal, reptile, amphibian, plant, and mineral on this Earth. and since she is identical to Olsen Twin #1 in every way, i guess the same goes for her too.

With chameleon-like versatility, Ben Kingsley went from peace-loving pacifist in "Gandhi" to intimidating pychopath in "Sexy Beast". Here, he finds a juicy role that slots somewhere inbetween. Luke Shapiro (Josh Peck), is a small-time dealer who literally carts weed around in an ice-cream wagon. He thinks he's depressed; his therapist, Dr. Squires (Ben Kingsley), thinks he just needs to get laid. Trouble is, the girl Luke's into is Squires' step-daughter Stephanie (Olivia Thirlby), a fact he keeps secret from his mentor. The movie follows the evolution of these relationships - Luke and Squires, Luke and Stephanie, and Squires and his cold wife (Famke Janssen). A fine little coming-of-age/rite-of-passage film that's elevated above the norm due to fine performances from the two leads. Peck perfectly captures the endearing, but dumb as a bag of hammers, nature of Luke. Director Jonathan Levine does well in keeping the 90's style flowing and nostalgic, with great use of hip-hop soundtrack but really this film is about one thing and one thing only...Ben Kingsley! Is this really Gandhi we are watching, sucking on bongs, smoking blunts and shagging one of the Olsen twins in a phone box? As it appears, yes it is, and it's fun to see Kingsley letting loose again and proving how good an actor he is. The problem is though, when he's not on screen the film suffers and becomes a tad tedious until he appears again. A decent effort by all involved but the material is nothing new and relies a little to heavily on Kingsley's eccentricity carrying it home.