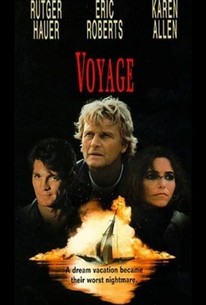 If you've seen the theatrical feature Dead Calm or the made-for-TV Adrift, you should have a pretty good idea of what the USA Network TV movie Voyage has in store for you. "Nothing outside but the sea...Nothing inside but the terror" promised the print ads. Eric Roberts, Connie Nielsen, Rutger Hauer and Karen Allen play four passengers on a sailboat in the middle of the Mediterranean. One of the couples owns the boat; the other couple is a pair of psychopaths. Examine the cast and take a guess as to who plays who. Voyage debuted June 2, 1993.

[The] novel concept, casting Hauer against his lunatic-killer type, is what holds Voyage neatly together.

Director John Mackenzie uses plenty of devices to churn up action, but the suspense remains mild.

There are no featured reviews for Voyage at this time.