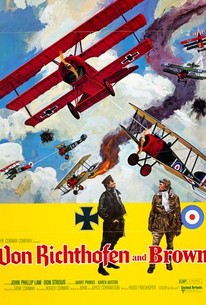 This film of the wartime exploits of Baron Von Richthoven, who was also known as the "Red Baron," was a relatively lavish Corman-brothers production, and is directed by Roger Corman. The film's airborne dogfight sequences are among its most notable features. Vintage World War I airplanes were used, and accidents during filming resulted in one death and several injuries. The evolution of airborne warfare from being a sporting game between gentlemen to its use as an instrument of total war is integral to the story. Von Richthoven (John Phillip Law), who becomes an air ace and an important German hero, was an early aeronautical rival of Hermann Goering (Barry Primus). So important was he to German morale that he was asked to retire from fighting, so that he could assume a position in the post-war German government. He refused, and was killed by a young Canadian (Don Stroud) in an airborne battle. Spookily enough, even though he died in the air, his plane is reputed to have landed intact.

Brian Sturdivant
as May

Lorraine Rainier
as Girl in Woods

It must rank with the most impressive films ever made about the First World War.

Corman's Poe-derived motifs are transposed exuberantly to the skies as WWI biplanes fight it out with romantic heroism.

An extraordinarily impressive movie by a filmmaker whose career has not always been marked by success, or even noble failure.

Roger Corman directs, rather disappointingly, an only moderately interesting example of the fashionable von Richthofen cult.

It's pretty hard to tell what Roger and Gene Gorman were trying to do in Von Richthofen and Brown, but it's pretty safe to say that they blew it.

A bad soundtrack and horrendous dubbing don't help matters, but the hardest thing to figure out here is who is shooting at whom in the air sequences.

As a straightforward piece of WWI movie, it's not bad, but neither is it particularly exciting -- unless you just want to see the impressive footage of the cool old planes.

There are no featured audience reviews yet. Click the link below to see what others say about Von Richthofen and Brown!