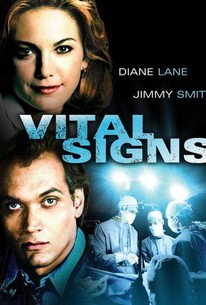 Marisa Silver helmed this tightly directed hospital drama reminiscent of David Swift's 1962 The Interns. Jimmy Smits plays Dr. David Redding, who guides seven student doctors through their third year of residency at Los Angeles Central's medical school. The cast includes Laura San Giacomo as Lauren Rose, a hard-working waitress putting her uncaring husband Kenny (Jack Gwaltney) through medical school; Kenny eventually breaks down the resistance of cool fellow student Gena Wyler (Diane Lane). Kenny is also competing with doctor's son Michael Chatham (Adrian Pasdar), who wants to become the best surgeon at L.A. Central; Michael, however, has to reconsider his goals when he realizes that he also needs Gena's love. Bobby Hayes (Tim Ransom) and Suzanne Maloney (Jane Adams) are also struggling with medical school, but they are a support team who study, work, and even sleep together. Through all the competitions and love affairs it eventually takes the wisdom of a dying cancer patient (Norma Aleandro) to make the medical students realize the important things in life.

James Karen
as Dean of Students

Charlie Hawke
as Swimmer
View All

A seriously familiar and entirely predictable tale of young doctors in love.

There are no featured audience reviews yet. Click the link below to see what others say about Vital Signs!