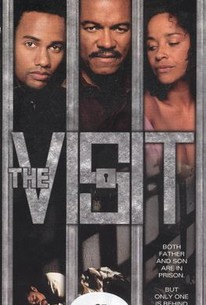 Critics Consensus: An earnest drama, The Visit gains much emotional power through its fine performances.

Critics Consensus: An earnest drama, The Visit gains much emotional power through its fine performances.

Critic Consensus: An earnest drama, The Visit gains much emotional power through its fine performances.

A cast of distinguished veterans and promising newcomers headline this stark prison drama from first-time writer-director Jordan Walker-Pearlman. Hill Harper stars as embittered inmate Alex, sentenced to serve time for a rape he claims that he didn't commit. His link to the outside world is his upper-middle class bother Tony (Obba Babatunde), the only family member who's come to visit him in the half-decade he's been in jail. On his latest visit, Alex pleads with Tony to have the rest of the family visit him, admitting that he's in the final stages of his battle with AIDS. Through flashbacks, dream sequences, and real-time encounters, Alex interacts with the people who have shaped his life -- his parents (Marla Gibbs and Billy Dee Williams), his old friend (Rae Dawn Chong), and his therapist (Phylicia Rashad) -- and attempts to overcome the seething anger and resentment that have punctuated his time in prison. The Visit was greeted with much acclaim when it premiered at the 2000 Method Fest Independent Film Festival.

Javier Silcock
as Lamar
View All

Critic Reviews for The Visit

It couldn't possibly work without a transcendent central performance. Harper gives us that, and more.

It's hard not to give it bonus points for avoiding prison movie clichés and for taking a long, unblinking look at the complex dynamics of one American family.

A testament to the tenacity of the family, particularly the African American family.

A spare and moving study of regret and redemption, marked with chilling truths about a life behind bars.

Contains some effective performances, not least from Hill Harper as Alex, the hero.

Powerfully depicts the flowering of spiritual redemption within a young man who has every reason to give in to despair.

More important than the technical precision of the actors' turns is the rapport they all share--which ultimately lends this story of a family its authentic, immediate poignancy.

At its best when considering measures of masculinity and dread of not living up to them.

Harper ... turns in a powerful, nuanced performance and alone makes The Visit worth your time.

It backs up its earnest quality with a minimum of sentimentality and a cast-full of straightforward, moving performances.

Audience Reviews for The Visit

There are no featured audience reviews yet. Click the link below to see what others say about The Visit!