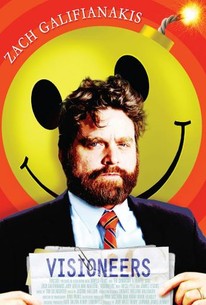 First-time feature filmmaker Jared Drake makes his directorial debut with this quirky black comedy set in the near future, and concerning a curious spike in cases of spontaneous human combustion. The Jeffers Corporation is the largest business in the history of humankind, and they got that way thanks to their strict philosophy of happiness through mindless productivity. But when people begin literally exploding due to unhappiness, Jeffers Corporation Level Three Visioneer George Washington Winsterhammerman (Zach Galifianakis) begins to fear that his time will come sooner rather than later. George lives a comfortable yet completely uneventful life, and when he starts having dreams in which he's the first President of the United States, his doctor informs him that they could be signs of impending explosion. Later, as the dreams become more frequent and his co-workers continue to detonate, George is prompted to reevaluate his mundane existence. Judy Greer, Missi Pyle, and James LeGros co-star in an existential black comedy featuring music by Tim DeLaughter of the Polyphonic Spree.

Moana, Star Trek Beyond, and More on Netflix and Amazon Prime This Week

The production quality is modest yet assured, as is Galifianakis who dampens down his stage presence and lets his great bushy beard be his most dominant and memorable trait.

...a seriously oppressive and downright unwatchable piece of work.

This is fairly familiar territory, and it's lacking an edge

A pseudo-absurdist commentary on corporate politics and fatuous American living at their worst.

It's a high-concept comedy, but it's down-to-earth and accessible, even a little touching.

There's a lot of indecision attached to this film for most critics and I understand why. There are a lot of conceptually interesting and interwoven themes throughout, but if it's trying to reach for an emotion it didn't stir any. This wasn't funny, and really didn't try to be. It had some slightly funny ideas that could have been broadened to make it zany and out there like in the iconic "Brazil" while still retaining its inherent unease. Instead the film decides to stay gloomy and uninteresting throughout. Though it's obviously a very dark and pedestrian kind of film, it does have a lot of visually interesting effects, and makes some decisions about this dystopian world that are actually encouraging. The premise of the film is that Galifianakis' character works in a faceless company's upper department, and he is absolutely miserable. He's a direct descendant of George Washington; he lives in a big house, and has a beautiful wife and a non-existent child who never comes out of his room. He is absolutely despondent, which is precarious since people all around him are exploding thanks to their own depression and feelings of inadequacy. Everyone is trying to find a cure for this phenomenon by engaging in happy activities and by being fulfilled just as most daytime talk shows tell us every day. With the prospect of death hanging overhead it's those who see the horror of life and all its wandering disconnect that are exploding, or feeling something that everyone else can't touch. It calls for living life, but no one engages, not even Galifianakis, and he's the title character. It has some conceptually different themes and ideas, but that can't sustain an entire movie.

Visioneers it's a criative surrealist black comedy that show other side of Galifianakis before the sucess of The Hangover.

Todd: My doctor says I have to pull the trigger on my gun once an hour or I'll explode.  I'll start out by admitting that I didn't finish Visioneers. It was just that off-putting to me. It is really quirky and really understated, but it is also extremely dull and lifeless. It thinks it is being original and funny, but it isn't. I was struck by just how boring and lifeless the film. The dialogue is weak, the characters aren't interesting. I understand that the actors talk in a drab kind of way to get the point of monotony across, but everything the film was doing seemed like drab filmmaking of the worst kind. A movie can't be original and lifeless. Well it can, but it will fail like Visioneers. It's hard to put words to describe my hatred for this movie. I didn't expect too much going in. The plot synopsis didn't really jump out at me. Done in a intelligent way, it has potential to be somewhat interesting, but nothing more. The way the film was done, it didn't even reach the point of somewhat interesting. The selling point for me were two actors I really like in Zach Galifianakis and the underrated and underused Judy Greer. These two actors aren't stars by any means and they can't carry a movie that doesn't have good dialogue or a good story. So they couldn't even come close to saving the travesty that was this movie. Their acting wasn't bad, they just had absolutely nothing to work with.  I wouldn't recommend this to my worst enemy. One of the most depressing films I've watched in a long time, not because of the content, but because of how fucking dull it was. This is one of those movies that I just can't even begin to describe everything I disliked about it. All I can say is don't watch it. Galifianakis may be funny, but with this material, you won't laugh. You'll end up shutting it off 45 minutes in like I did. If you can make it to the end, more power to you. But I wasn't going to put myself through anymore torture.

After a singeing opening scene and interesting expository, the movie loses it's touch as it begins to hit the 1 hour mark. The third act is a disappointing cluster of plot, emotion, and situation, save for the final 10 minutes. Galifianakis shows above-average chops as the frontman, a perfect casting choice. The real star, however, is debut director Jared Drake, who shows remarkable talent behind the camera and a certain eye for interesting cinema. Definitely a person to watch for in the future. In the end, you should only watch it if you're a BIG fan of the black comedy genre.