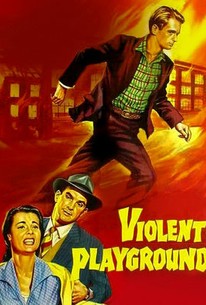 Violent Playground opens with a few West Side Story style shots of a Liverpool street gang, commandeered by a very nasty-looking David McCallum. We're going to be seeing a lot more of McCallum before the final fadeout: His sister (Anne Heywood) is in love with an upright police officer (Stanley Baker). The film plods along predictable grounds until the climactic rumble sequence, which is as good as anything ever seen in Hollywood "J.D." picture. Violent Playground didn't get much American play in 1957, principally because there was a glut of such films at the time. The picture received a new lease on life in the early 1960s to cash in on the Man From UNCLE popularity of David McCallum. ~ Hal Erickson, Rovi

George A. Cooper
as Chief Inspector

Tsai Chin
as Primrose
View All

It is very sad that such a wonderful opportunity to make a true to life film on such an important theme has been allowed, once again, to slip away.

There are no featured audience reviews yet. Click the link below to see what others say about Violent Playground!