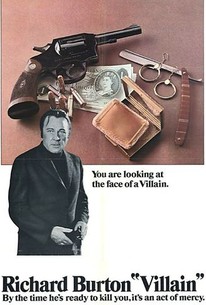 Richard Burton seethes and barks as Vic Dakin, an unsavory British underworld thug with a mother fixation that only James Cagney's Cody Jarrett from White Heat would appreciate, in this Michael Tuchner-directed crime drama. Vic is bound and gagged to his dying mum (Cathleen Nesbit) with such an intensity that his only outlet outside of his mother's bedroom is by plying a handy razor blade or rooting around in the homosexual rough trade. But Vic is rough enough himself and, when he hatches a plot to rob a payroll, he takes to one of his recruited goons, Wolf Lissner (Ian McShane), in a way that demonstrates his true love for him -- he berates him, slaps him around, and then takes him to bed. Unfortunately for Vic's psychotic anti-social tendencies, a dedicated police inspector, Bob Matthews (Nigel Davenport) has devoted his life to finding something on Vic to put him in the slammer forever. And this heist may be just the ticket.

A ludicrous exposé of the lower depths of London crime, it tarts up the hoariest old gangster clichés with a bit of homosexuality and a lot of thuggery, and manages to be both brutish and maudlin.

In its payroll heists, its car chases, its beatings and in its final confrontation, the movie employs gestures that in other, better films, such as "Get Carter," seemed classic, but here are only second-hand.

Wavering uneasily between horror, black comedy and sentimentality, it's held together by Burton's performance, a brave attempt to escape the straitjacket of being the world's highest-paid movie star.

If you enjoy a good gangster film or just want to luxuriate in an arguably incongruous but never less than hypnotic performance, it comes recommended.

Burton is truly creepy in a fascinating in-depth performance...

In the end Richard Richard Burton's performance ceases to rely on the -profession of acting; it becomes entirely dependent on the exercise of violence.

It is the sort of film one can recommend without qualification as an interestingly made and satisfactory entertainment should it be encountered on the bottom half of a double bill in a subsequent neighborhood run.

There are no featured reviews for Villain at this time.