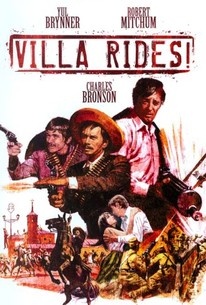 Yul Brynner stars as the legendary Mexican revolutionary Pancho Villa in this 1968 epic that was originally written by Sam Peckinpah, who hoped to direct it. But studio bosses instead hired Buzz Kulik and cut the script. Villa is commanded by General Huerta (Herbert Lom) and assisted by the sadistic Fierro (Charles Bronson). Captain Francisco Ramirez (Frank Wolff) is a counter-revolutionary leader for whom an American pilot, Lee Arnold (Robert Mitchum), is smuggling guns from Texas. While Arnold is in a small village waiting for his place to be fixed, he sees Ramirez's troops attack the village and get routed by Villa. The rebels arrest Arnold for gun-running and sentence him to face a firing squad. He works a deal to save his skin by agreeing to fly missions for the revolutionaries. While Villa's men attack a train, Arnold bombs government troops with grenades. Arnold's aerial support saves Villa when he is sent on a doomed mission by Huerta, who is vying with Villa for power. Arnold escapes to Texas and Villa is arrested for disobeying Huerta's orders. Villa eventually escapes, finds Arnold in Texas, and convinces him to fight again for the revolution, which is now targeting Huerta, who has assassinated the Mexican president and taken power.

Jill Ireland
as Girl in Restaurant

There are no critic reviews yet for Villa Rides. Keep checking Rotten Tomatoes for updates!

There are no featured audience reviews yet. Click the link below to see what others say about Villa Rides!