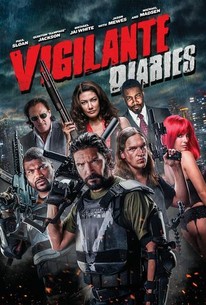 Paul Sloan
as The Vigilante

Kevin L. Walker
as The Kid

Mark Sherman
as The Geek

Artur Shirinyan
as The Lion

Pritesh Shah
as Nitin
View All

"Vigilante Diaries" never rises above what it is: a bunch of frenetic shootouts and fight scenes unencumbered by plot.

Vigilante Diaries is overly long, annoyingly unthreatening baddies and a script that had more plots than the entire Marvel Cinematic Universe combined.

A B-grade action movie filled with racist, homophobic and sexist humor, knowing its audience is likely to eat it up.

Vigilante Diaries is a comprehensive disaster. Close the book on this diary, there's nothing exciting to be found here.

Nothing more than a 105-minute salute to mindless gunfire and punching.

It's not really a film, but a collection of clichés without a strong narrative spine.

I must confess that it held me in its thrall from start to finish purely on the strength of the over-stimulation of its incessant visual capture.

There are no featured reviews for Vigilante Diaries at this time.