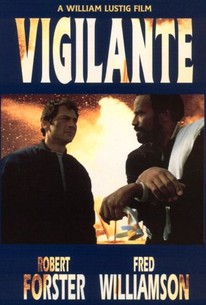 When his family is attacked and his son killed by a local gang, mild-mannered Eddie (Robert Forster) snaps when the killer isn't brought to justice. Tired of being a victim, Eddie joins a group of vigilantes and sets to freeing his neighborhood from the threat of the bullying thugs.

A restrained film that has its entertaining moments.

There's a certain laudable doggedness in its creation, I guess

First and foremost I am still shocked this is an 80's movie, I genuinely thought this was a trashy 70's flick at first. OK in all honesty I kinda thought it was a blaxploitation movie because Fred Williamson was in it and the whole thing looks so grungy and cheap. Just look at the movie poster...it looks like an old videogame advert. Kinda like a third rate advertisement for a Double Dragon clone or any other scrolling beat em up involving punks on the streets when the sun goes down. This is your standard revenge thriller, the type of movie that most probably influenced the likes of Quentin Tarantino, Robert Rodriguez and led to the various slick revenge action thrillers today ('The Equalizer' and 'John Wick'). Eddie Marino (Forster) is a happily married man with a young son in New York. In a brief encounter with a violent gang, Marino's wife slaps a Che Guevara looking gang member across the face. Later that day the gang turns up at her door, breaks in, trashes the place, kills the young boy and stabs her badly. Unfortunately for Marino the law is corrupt, the system doesn't work and the gang member gets off, you know what happens next. This movie could only have been made in this era really, New York in the late 70's and early 80's was a dirty crime ridden place. You only have to look at the cities suburbs/locations whilst watching the film to see how different it was. Its quite interesting actually, seeing all these beat up cars running around, street trash, dilapidated buildings and stores on every corner, movies like 'Taxi Driver' and 'Serpico' back this up, its not movie magic. Noo Yawk was a hard dangerous place and the law enforcement was known to be...dodgy, this movie uses all of that to good effect. Yeah sure it seems a bit tame in places these days, the street gang looks ridiculous in their punk attire. God knows what some of them are wearing, the main bad guy seems to have some kind of native American thing going on with a headband and feathers...I think it was. All the other guys are decked out in typical biker duds and covered in shiny studs, badges and spikes. Most of them are black dudes and Latinos (Mexicans?) with big thick sideburns or tashes (naturally), and they have one blonde female in their ranks, basically your stereotypical street gang from the 80's. The violence is actually quite shocking and graphic, some stuff you see and some is implied yet still pretty horrific. The only sequence where you do see a lot of blood was the street gang shooting up a police car in a hail of silenced gunfire. The scene where Nick (Williamson) shoots an armed (baddie) female inside one gang members abode is pretty shocking to be honest, I knew he was gonna do it but the way she is flung back into the bath tub was quite unexpected to say the least. The most shocking scene by far is of course the murder of Marino's young son, you don't see it but you know exactly what happens. Again this did surprise me greatly as I did not expect it at tall, didn't think the punk would be so evil! The rest of the fisticuffs is pretty tame and quite amusing at times, especially seeing Forster naked in prison trying to fight off two other horny inmates. Yep that's right, Forster's character winds up in jail for thirty days because he tried to assault the judge after the gang member got let off the charges. The police, judges and lawyers are all dirty in this movie. If it wasn't for action man Woody Strode then Forster's character would have been the meat in an inmate sandwich. Actually most of the prison scenes are slightly amusing really, its all so cliched as I'm sure you can guess and seeing old man Strode beat up this gigantic inmate is both awesome and hilarious. The one thing I don't get is these vigilantes that clean the streets of scum and eventually end up killing off some people including a corrupt member of the mayor's office, don't get caught. How on earth they manage to get away with killing these people is beyond me, I realise the theme of the movie is corruption with everyone looking out for themselves but it seems unrealistic. On the other hand we never actually find out what happens to every character so who knows. We don't even see what happens to the whole gang as only the two leaders are dealt with so... Nothing overly special these days but obviously back in the day this was pretty hardcore stuff. Its still entertaining, clearly a tad similar to a certain Bronson movie and its fun to see Williamson swing into action with his kung-fu. This most definitely still packs a punch.

A classic B-movie showing the true corruption in the city. This is extremely realistic and violent, turning into a horror movie for anyone who lives in New York. However, this can be taken almost 100% seriously though, which mustâ€™ve been hard with such a low budget and multiple restraints. The acting is so above average for something typical of the genre, Robert Forster and Fred Williamson are the greatest. The music is some of my favorite, coming close to the original Assault on Prescient 13, which says a lot. There are very few movies like this around and this is nothing short of great.

Not near as sleazy as Lustig's other works, but just as entertaining. Sure it's a ripoff of vigilante films that came before it, but it's still damned fun.

Williamson and Forster in one movie? Does that sounds awesome or what. How about making it directed by Lustig (Maniac, Maniac Cop). It's a really good revenge grindhouse type flick.