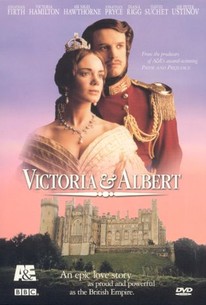 While 18-year-old Victoria (Victoria Hamilton) struggles to escape the rule of her domineering mother (Penelope Wilton), King William IV dies and the teenager assumes the throne as Queen of Great Britain and Ireland and empress of India. With the help of sympathetic advisers and her lady-in-waiting, Baroness Lehzen (Diana Rigg), Victoria asserts herself, relocating her mother's living quarters and dismissing her mother's overbearing supporter, Sir John Conroy (Patrick Malahide). She then reluctantly agrees to invite her first cousin, Albert (Jonathan Firth), prince-consort of Saxe-Coburg-Gotha, Germany, to the royal household as a possible match for her. Remembering him from childhood, she thinks him a bore. But when grown-up Albert arrives, Victoria falls madly in love with him. After they marry, Victoria must counter troublemaking political schemers on the one hand while attempting to assuage a disenchanted Albert on the other. The problem is that he has nothing to do. He is merely an ornament, albeit a cherished one. He cannot even command a servant to clean a fireplace. However, when the administration of the queen's friend and adviser Prime Minister Melbourne (Nigel Hawthorne) collapses, Albert becomes Victoria's partner in government as well as in marriage. In time, she realizes that her husband is really a co-ruler: "A king," she says, "in everything but name." Together, they reign over their empire -- and their brood of nine children. It is Albert's task to supervise the country's Great Exhibition of 1851 to promote British pride, commerce, and industry. But his untiring efforts to make the exhibit a success take their toll on him, and he falls ill. However, he tenaciously clings to life -- and Victoria -- and lives another decade before typhoid fever claims him in 1862, leaving behind a distraught Victoria and a monarchy he helped rescue.

Roger Hammond
as Duke of Coburg

Penelope Wilton
as Duchess of Kent

There are no critic reviews yet for Victoria & Albert. Keep checking Rotten Tomatoes for updates!

There are no featured reviews for Victoria & Albert at this time.