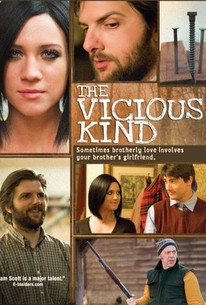 Untrusting of women following a bitter breakup on the eve of Thanksgiving, a misanthropic construction worker finds himself inexplicably attracted to his younger brother's new girlfriend. Caleb Sinclaire (Adam Scott) has just been through a particularly difficult breakup. Isolated, yet strangely contented with his newly single status, Caleb wears his distain toward women as a macho badge of honor. However, when Thanksgiving weekend arrives and Caleb meets his younger brother Peter's (Alex Frost) new girlfriend, Emma (Brittany Snow), his initial attempts to convince his sibling that the relationship will yield nothing but pain are quickly sidelined by his growing attraction to the beautiful girl. His vulnerability gradually bubbling to the surface over the course of the holiday weekend, Caleb is soon forced to confront the feelings that he's been trying so desperately to conceal beneath a swaggering facade. ~ Jason Buchanan, Rovi

Jordan Berkow
as Hannah
View All

Critic Reviews for The Vicious Kind

The characters spend far too much time working through their problems with drama-deadening directness.

It's the sort of Sundance-approved movie that takes place in a stereotypically bleak rural locale, while an acoustic guitar twangs mournfully over the soundtrack.

Indie drama reveals talent in front of and behind the camera.

The Vicious Kind upends the heavily tread dysfunctional family drama in ways that are unique, surprising and memorable.

Vicious Kind doesn't have much in the way of new corners to offer the domestic disturbance genre, resulting in a film greatly dedicated to misery, but offers no tangible reason why anyone outside of the filmmaker should care.

What lifts this trenchant dramedy out of the ordinary are Krieger's ear for dialogue and Adam Scott's breakthrough performance as a family's black sheep seemingly intent on earning that bad rap.

Inevitably, the film devolves into weepy catharsis, but with slick cinematography and colorfully cruel dialogue for Scott to chew up and spit at every member of this fine ensemble.

In a sharply scripted comic drama, Brittany Snow stars as the pensive Emma, a girl caught between two quite different brothers.

What initially seems like a [Neil] LaBute knockoff develops into its own rather interesting examination of men who mask pain with maliciousness.

Audience Reviews for The Vicious Kind

I haven't really seen Adam Scott in anything, but his turn in this dramatic role is indeed vicious but also vulnerable. Caleb's insulting outbursts cut with vitriol, and his blubbery apologies pour with nonsense that he can't quite understand himself. I'm not really sure of the movie's premise - the only way Caleb knows how to protect is brother is by hurting him and that's why he sleeps with his brother's girlfriend...? The motifs of desperate need and succumbing to attraction because of the other person's attraction to you are all interesting, but the ending shows no real aftermath of that behavior.

Secrets and lies unfold in a troubled family when a man develops a lustful fascination with his brother's girlfriend when the latter brings her home for Thanksgiving. Adam Scott's performance in this deftly constructed family drama is everything I've heard it was and more. His crying scenes are as convincing as his most vicious outbursts, and Scott conveys an emotional truth that is rarely seen but always enjoyed. In many dramas we see characters say nasty things to each other, and not seconds later, they either apologize or give that regretting look, which is supposed to convey to the audience that even though this character just did something we should disapprove of, we should still like him/her. It's false and performative, but I've learned to put up with it. When the script calls for such moments, Scott's strength is he makes such moments work, incorporating them into the manically depressive nature of Caleb; other times, Scott doesn't care if we don't like Caleb. Brittany Snow manages to be both alluring, vulnerable, and strong, while Alex Frost is perfectly douchey. And who knew that J.K. Simmons could handle drama with such emotional range and dexterity? The script starts off very well. The ways in which information is hinted at and slowly revealed are quite deftly carried, and most of the characters are finely drawn. However, by the end of the film, there were a few bits so ridiculous that writer/director Lee Toland Krieger deliberately aimed for laughs in the most awkward places. Also, the film's penultimate moment was so subtle that it slipped into obscurity. The last ninety minutes were leading up to this moment, but we don't know enough about what goes through the character's head to get a fair idea of what happens in these characters' lives after the film has ended. The smile, if it is a smile, is too enigmatic to hinge the entire film on. Overall, this is an excellent film with just a few minor flaws and what should be a star-making performance by Adam Scott

Kind of odd and offbeat, but it was enjoyable to watch. Very interesting chemistry of characters.

CAST: Brittany Snow, Adam Scott, Alex Frost, J.K. Simmons DIRECTED BY: Lee Toland Krieger SUMMARY: Caleb Sinclaire is a bitter construction worker whose life is turned upside down one Thanksgiving weekend. Estranged from his family, Caleb lives an isolated, but contented, life. Following a difficult breakup, he becomes scornful toward women and wears his disdain as a badge of honor. Caleb's resolve is tested, however, when he meets his younger brother Peter's new girlfriend, Emma. Immediately distrustful of her, Caleb warns Peter that she will only end up hurting him. Despite his efforts to protect his brother, he finds himself drawn to Emma and surprised by his growing attraction. Caleb's unexpected feelings force him finally to confront the vulnerability he has struggled so long to conceal. MY THOUGTHS: I love these types of dark comedies. I am just drawn to them. I've found that you find really good acting in independent movies, that's why I like them the best. They always have great stories and good acting. This was a bit of a complicated story and I also found it to be a bit sad. Loved Adam Scott in this, he really gives a great performance in this film. His charater Caleb is very twisted in a sense cause of his dark humor. But he's also just a sad individual who's been wronged by the one's he cared the most about. He has this inner torment of good vs. evil and seems to be struggling with that. I happened to like his smart-ass attitude and found it funny. Brittany Snow was also good in this and I liked her darker look. J.K. Simmons was great as always and had some great one liners. If you like films that are more about the story and the characters, then you will like this one.