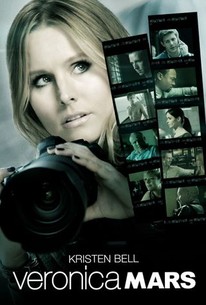 Critics Consensus: It might be a more entertaining watch for diehard fans of the show, but Veronica Mars offers enough sharp writing and solid performances to entertain viewers in the mood for a character-driven thriller.

Critics Consensus: It might be a more entertaining watch for diehard fans of the show, but Veronica Mars offers enough sharp writing and solid performances to entertain viewers in the mood for a character-driven thriller.

Critic Consensus: It might be a more entertaining watch for diehard fans of the show, but Veronica Mars offers enough sharp writing and solid performances to entertain viewers in the mood for a character-driven thriller.

On the eve of graduating law school, Veronica Mars has put Neptune and her amateur sleuthing days behind her. While interviewing at high-end New York law firms, Veronica Mars gets a call from her ex-boyfriend Logan who has been accused of murder. Veronica heads back to Neptune just to help Logan find an attorney, but when things don't seem right with how Logan's case is perceived and handled, Veronica finds herself being pulled back into a life she thought she had left behind. (c) Official Site

James Franco
as Himself

Benjamin Franczuszki
as Logan in College

Ira Glass
as Himself

Charles Latibeaudiere
as Himself

Harvey Levin
as Himself

Perhaps you need to be a lover of the original series to fully appreciate this latest effort.

Veronica Mars will definitely please the fans desperate to catch up with the residents of Neptune, but I feel certain it won't sate us for long.

The film is an obvious labor of love for all concerned, and the good times are infectious.

The film even manages things neatly at the end: we get a mixture of closure and openness, in which things are rounded off, yet there's still the possibility of another adventure.

The uninitiated may not go for the all-too-convenient crime solving, melodramatic love triangle, and playful banter, but cultists will find all the show's pleasures intact.

Veronica herself is such a breath of fresh air as a strong female character: smart, secure, resourceful, loyal, funny and not the slightest bit chickish.

While fans of the show will find little tidbits paying homage, new viewers won't be lost as a suspenseful story plays out, thanks to a talented cast and writer/director.

But part of what made our hero so endearing was that she was a kid playing dress-up in a grown-up world. Now an adult, Veronica's schtick is reminiscent of putting your favourite song on repeat: sure, it's fun for awhile, but it gets old fast.

Thomas hit the mark with Bell and a decade away has not dulled the razor wit Veronica wields toward any adversary unfortunate enough to cross her path.

Veronica Mars, the movie, hits the romance too hard but keeps both the humanity and the noir edge.

There are no perfectly happy endings in noir, but if this is the last word on Veronica Mars, it's a fitting and even hopeful one, but it also opens up some great possibilities for the future of the franchise.

Veronica Mars will inevitably delight fans of the series to no end, but newbies shouldn't be shy -- it's actually quite the perfect introduction to the series.

First and foremost will the Veronica Mars Movie satisfy the fans of the tv series? Absolutely. Will it satisfy non-fans? Yes. The Veronica Mars is everything a true fan can want- a return to form, sharp dialogue mixed with wit and strong developed characters. The Veronica Mars movie finally gets to embrace its noir tones and darker themes. The mystery is thriving and the love triangle finally has a resolution. I can't find a fault in the movie but hey I guess I'm a marshmallow.

Failed to strike a chord with me. I've not watched the series, let alone be its fan, and have no idea if it affects the viewing experience any which way.

This is a great continuation of the Veronica Mars television show, and a thoughtfully planned ending to a saga that everyone wanted to see finished. Cancelled before its time was over, the original show had an edgy, yet wounded lead character who didn't take shit from anyone and solved mysteries because they interested her. In this update we see all our favorite supporting characters, we resolve the relationship between Logan and Veronica once and for all, and the writing is of the same quality as the original show. The only thing that felt strange was the way the film ended. It was very sudden, almost unplanned in its bland simplicity. It's not that it's uncharacteristic of Veronica, either, just that it's very out of nowhere. Otherwise I found every moment in keeping with its predecessor, and a perfect end to a lovely show.

A well-done follow up to the cult smash TV show with the same title, concerning a rebellious young investigator named Veronica Mars (Kristen Bell), and how her attempts at leaving her past life behind her as she finishes up graduate school and appears to have a bright future ahead. But she is yanked back into her old life when a former boyfriend, Logan Echolls (Jason Dohring) needs her help to wipe his record clean after he is wrongly framed for murdering his girlfriend. The writing is as sharp as it was in the show, full of wonderful dialogue and nice twists in the plot that effortlessly carry this film. Admittedly, I am a huge fan of the TV show so I was biased from the start, but from a pure fanboy perspective, this is everything you could want from a movie adaptation.