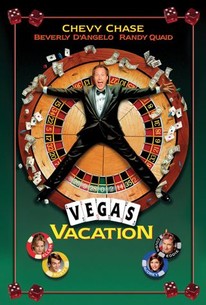 This is the fourth in a series of movies that began with National Lampoon's Vacation in 1983 and feature the family headed by Clark Griswold (Chevy Chase) going on wacky vacations. This time, the Griswolds visit Las Vegas. Clark immediately goes to the blackjack table and starts blowing all his money, continually encouraged to spend more and more by a taunting dealer, Marty (Wallace Shawn). Ellen Griswold (Beverly D'Angelo) becomes smitten with the lounge singer Wayne Newton (playing himself), who invites her to sing onstage with him. Their son Rusty (Ethan Embry) is incredibly lucky playing dice, and he is virtually adopted by a family of gangsters who see him as their meal ticket. Daughter Audrey (Marisol Nichols) gets hooked up with her wild cousin Vickie (Shae D'Lyn), who takes her to sleazy dance clubs. White-trash cousin Eddie (Randy Quaid), who lives on a former A-bomb test site in the nearby desert, also gets involved with the capers. ~ Michael Betzold, Rovi

Wayne Newton
as Himself

Christie Brinkley
as Woman In Ferrari

Siegfried Fischbacher
as Himself
View All

The subplots involving D'Angelo and Newton and Ethan Embry -- the Griswolds' son, who can't stop winning -- have their charms.

A tepid fourth entry in the popular 1980s series that is decidedly showing its age.

I'll lay you 3-to-1 odds that by the end of this flick even fans will be thinking that this wasn't a trip worth taking.

There is nothing more memorable about Vegas Vacation than the flatness of the writing in Elisa Bell's script and the uninspired direction of first-timer Stephen Kessler.

Why, if [Chevy] Chase is such a funny guy, does he make such unfunny movies?

The film's only life is provided by Randy Quaid, back as Ellen's redneck cousin.

Despite Chevy Chase's decent effort trying to revive the Griswold franchise, VEGAS VACATION is just a big disappointment. This one could have just premiered on TV, as it resembles that sort of mediocrity.

...the Griswolds bring down the house.

It's a bad sign when National Lampoon wants its name out of the title.

The fourth and weakest trip with the hapless Griswolds.

A high colonic for the brain.

While a slight improvement of "European Vacation," the (technically) fourth film in the "Vacation" franchise is extremely poor, while still managing to keep us liking it's characters, which is a rare feat. If the cast had been replaced, this film would have been a whole lot worse. The shenanigans that the characters get into are usually the best parts of these films, and there is no exception with that here. Aside from that very little praise I can give the film, "Vegas Vacation" is not only one big commercial for Vegas, but it also says that not matter where a family goes, they can always have fun if they are together. It is definitely the most family friendly of the road trip films (Christmas Vacation notwithstanding). There is really not much to say about this film. It is a lazily written romp about a family visiting Las Vegas that could have easily been better. With a few enjoyable moments, it makes it a more morable sequel than European, but it is still not a good movie in any way shape or form. The "Vacation" films have always been up and down, and this is definitely one of their downs.

The Griswolds are back, and this is easily their worst vacation yet. I don't think it's as awful as some do, but yeah, it is really dumb, tired, dull, and overly reliant on formula. And also devoid of contributing anything new. I still give it some credit though, because it does have its moments, even though I really don't want it to continue after this. Featuring new kids but the same parents (a series tradition), Clark decides to take the family to Vegas where, besides having lots of fun, he also plans to renew his wedding vows to Ellen. As you'd expect, all sorts of trouble and shenanigans ensue, all of them with predictable results, but at least this time each Griswold had their own subplot, which doesn't often happen. The movie does have a decent amount of laughs, but it's definitely more misses than hits. At least Quaid is back, and we do get some great cameos and special appearances, most notably Wayne Newton and Wallace Shawn to save things, so that's good I guess. Overall though, this is just run-of-the-mill blah, and nothing really all that special.

Hmmm losing the appeal here, nice idea and nice touches here and there, Chase still makes me laugh as does Randy Quaid as 'Eddie' but the comedy is becoming a bit forced now. Just about acceptable on the whole, best scene...'Clarke' tells a porky to wife 'Ellen' about not being hooked on gambling, then proceeds to leave the room go downstairs to the gambling den, using a cam shot following his progress, places a bet, loses, lets out the most hilarious grimace of frustration and then proceeds to run back upstairs to 'Ellen' LOL! That is pretty much the best sequence and funny moment in the entire film with some good old fashioned facial humour from Chase, the rest is rather mundane to be honest but you could still do worse.

Follow-up to Christmas Vacation isn't as funny as I'd hope it would have been. The film is a decent enough comedy with quite a few laughs; unfortunately, it is not as memorable as Christmas Vacation, which in my opinion is a comedy classic. But despite its imperfections this is a decent comedy film. However it's clear that the producers were running out of ideas. I think it's a great shame because this film could have been memorable. I found the film to be quite funny at times, but it lacked something to really make it special. Like I said, this isn't Christmas Vacation. Most of the jokes are tired, unimpressive and original. It's a great waste of Chevy Chase. As this is the fourth entry in the Vacation series, it's clear that the producers have run out of ideas and are trying to deliver a good film, unfortunately, it's to mixed results. The film is at times funny, and does bring on a few chuckles, but it's pretty minor to previous Vacation films. I think the series should have stopped at Christmas Vacation. What's really a shame here is that the concept of the Griswold family spending a vacation in Vegas is a good idea for a film; unfortunately the result is only a decent comedy with a few laughs here and there. Vegas Vacation will likely disappoint fans of the previous films in the series as it's clear that the screenwriters have run out of ideas. This film could have been memorable, but ends up being only decent.