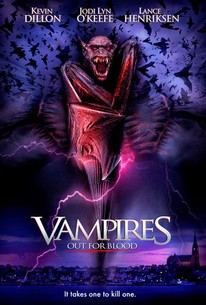 Out for Blood Photos

Kevin Dillon portrays Hank Holten, a detective who has discovered why numerous people have disappeared: vampires are killing off people who frequent the town's rave scene. Holten's work brings him too close to the undead, and soon he has become one of their victims; however, he attempts to use all of his strength to bring them down before he succumbs. Directed by Richard Brandes, Vampires: Out for Blood co-stars Lance Henriksen.

Critic Reviews for Out for Blood

There are no critic reviews yet for Out for Blood. Keep checking Rotten Tomatoes for updates!

Audience Reviews for Out for Blood

The low-budget vampire film Out for Blood is fairly generic and doesn't have much ambition. While investigating a missing persons case Det. Hank Holten ends up discovering a coven of vampires, and seeks the help of his estranged wife after he gets bitten. Kevin Dillon, Vanessa Angel, Jodi Lyn O'Keefe, and Lance Henriksen lead the cast and give typical B-grade performances. And, the sets and makeup effects are rather cheesy. However, there are a few interesting plot twists that add a bit of intrigue and suspense to the film. Yet overall, Out for Blood is a stereotypical horror film that sticks to the usual tropes.

I wont waste too much time on this review, but this is awful! If you are expecting a fairly decent Vampire film considering the cast then you are in for a shock. It's very low budget and it really shows, feels like a TV movie. How on earth did Lance Herikssen get mixed up with this!?! Avoid like a vampire dodging sunlight!

Average straight-to-DVD effort here. Nice to see Kevin Dillon and Lance Henrikson do their thing, but overall they could not elevate the quality of this film above dull. It's not terrible - I've seen much worse - but it lacks imagination.

Not bad vampire thriller.When a cop,played by Kevin Dillon, investigates strange disappearances in town he finds alot more than he bargained for and after getting bitten by an ancient vampire,realises he has only 24 hours to find out about the disappearances and find those responsible before he becomes a vampire himself.Although this has a bit of a budget,made for TV feel at times,it's pretty good and has some scares and moments of gore.Plus,i have no idea who Jodi Lyn O'keefe is but....yes,i would.

Out for Blood Quotes