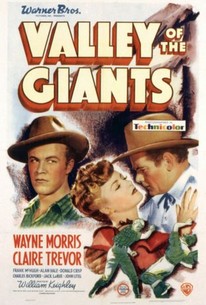 Valley of the Giants Photos

This third film version of Peter B. Kyne's Valley of the Giants benefits from the breahtaking Technicolor location photography of Sol Polito. Hero Bill Cardigan (Wayne Morris) is a lifetime resident of California's Tall Timber country. When evil land-despoiler Howard Fallon (Charles Bickford) arrives with a team of lumberjacks to strip the territory of its trees, Cardigan tries to stop them, only to discover that Fallon has the law on his side. Eventually, Cardigan finds an unexpected ally in the form of golden-hearted saloon girl Lee Roberts (Claire Trevor), who enables the forces of Good to triumph in the final reel. Stock footage from Valley of the Giants would be seen for years afterward in Warner Bros.' lesser outdoor dramas and two-reelers. The film was remade in 1952 as The Big Trees, with the emphasis shifted so that the Charles Bickford character, now played by Kirk Douglas, ultimately emerges as the hero!

Critic Reviews for Valley of the Giants

Photography is outstanding, with several gorgeous shots of the northern California landscape.

There are no featured reviews for Valley of the Giants at this time.

Valley of the Giants Quotes