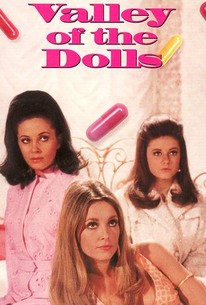 Critics Consensus: Trashy, campy, soapy, and melodramatic, Valley of the Dolls may be a dud as a Hollywood expose, but has nonetheless endured as a kitsch classic.

Critics Consensus: Trashy, campy, soapy, and melodramatic, Valley of the Dolls may be a dud as a Hollywood expose, but has nonetheless endured as a kitsch classic.

Critic Consensus: Trashy, campy, soapy, and melodramatic, Valley of the Dolls may be a dud as a Hollywood expose, but has nonetheless endured as a kitsch classic.

Valley of the Dolls Photos

A cinematic take on a 1960s best-seller, Valley of the Dolls traces the ups and downs of three young women as fame, booze, pills, and men consume their lives. Well-bred, small-town Anne Welles (Peyton Place star Barbara Parkins) arrives in New York eager for fame but settles for a job assisting theatrical attorney Henry Bellamy (Robert H. Harris). The job leads her to cross paths with Helen Lawson (Hollywood veteran Susan Hayward), the grand dame of Broadway musicals, and Neely O'Hara (sitcom star Patty Duke), an up-and-coming performer whom Lawson unceremoniously boots from her latest show. Neely lands on her feet thanks to a series of nightclub gigs, and soon she and Anne befriend Jennifer North (Sharon Tate), a buxom starlet. As Neely becomes a huge star of stage and screen and Jennifer appears topless in a string of European "art" films, Anne becomes a wealthy cosmetics spokeswoman and suffers though a passionate but failed affair with aspiring writer Lyon Burke (Paul Burke). As the pressures of fame and failed romance take their toll on all three women, they take refuge in food, sex, liquor, and pills -- especially Neely, who becomes downright monstrous (the titular "dolls" are the uppers and downers to which she becomes hopelessly addicted). Although the film's characters are fictitious composites, Neely most closely resembles Judy Garland; Garland herself was originally cast as Lawson, but she was replaced after only a few days by Hayward. Although the film's trailer played up the story's titillating subject matter, the script for Valley of the Dolls actually toned down Jacqueline Susann's novel. And despite the fact that Dionne Warwick can be heard singing "(Theme From) The Valley of the Dolls" twice during the film, contractual snags kept her from releasing the soundtrack version; a different arrangement later became a number two pop hit in 1968. ~ Brian J. Dillard, Rovi

Barry Cahill
as Man in Bar

Joey Bishop
as MC at Telethon

News & Interviews for Valley of the Dolls

View All Valley of the Dolls News

Critic Reviews for Valley of the Dolls

The cliche of show business as a dream world may have been wide-eyed and saccharine. But Novelist Susann's view of Hollywood as nightmare Valley merely adds up to the old naivete in reverse.

Too dull even to function as camp.

Jacqueline Susann's 'exposé' of Hollywood gets the cliché-ridden treatment it deserves from Robson.

It's an unbelievably hackneyed and mawkish mish-mash of backstage plots and Peyton Place adumbrations.

It tries to raise itself to the level of sophisticated pornography, but fails. And it is dirty, not because it has lots of sex in it, but because it firmly believes that sex is dirty.

A must-watch even if the movie had nothing else going for it, which happily, it does.

I knew the clothes would be terrific when I spotted "Handbags by..." in the opening credits. And it's the outfits (along with the unintentionally fevered atmosphere) which stretches this film up to two stars.

Valley of the Dolls rose from the ashes to become a so-bad-it's-good cult film of the highest order.

In its melodrama, Valley of the Dolls may be reduced to trashiness, but we'd be denying its skill and sensitivity, and perhaps the value of trash. It's not so bad it's good; it's just good in a different way.

It thinks it it is incredibly sophisticated and clever, when it is just the dumbest damn thing.

The newfound envelope-pushing in cinema, tested so brilliantly in 1967 by Bonnie and Clyde and The Graduate, is botched here.

Audience Reviews for Valley of the Dolls

A terrible film that feels tremendously dated today, as I imagine it did just as well back in the 1960s (although obviously not from a thematic point of view), like a mawkish vintage soap opera that is not ashamed of its laughable dialogue and absurd situations.

A fairly good take at the life of the 60s but I didn't care for it very much.

Valley of the Dolls follows the lives of three young women as they struggle to succeed in the cutthroat world of show business. Along the way they contend with drug abuse, alcoholism, adultery, abortion, Huntington's disease, suicide and Susan Hayward. In 1967 it's racy, risqué and controversial. In 2011 it seems exaggerated, sensationalized and preachy.

Maybe it's a bit slow and we've seen this theme often, but this movie has something, it's very timely for the late sixties, and the cast is great. It's a good drama, even though some people think of it as campy now, I still like it.

Valley of the Dolls Quotes