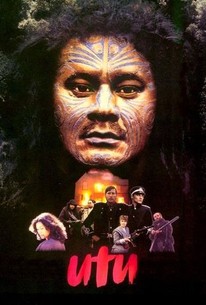 Utu is the Maori word for "Retribution," which sums up the chief motivating factor of this New Zealand-produced drama. Set in the 1870s, the film details the exigencies of British Colonial rule. A Maori scout, Te Wheke (Anzac Wallace), stumbles across a native village that has been destroyed in a British raid. Since it is the scout's own village, he deserts the British army, the better to seek "utu." Leading a vigilante force consisting of his fellow Maoris, Te Wheke kills as many British settlers as he can get his hands on. The feverish conviction of his crusade is in stark contrast to the attitudes of the British, who seem more concerned with material possessions than with human beings. Popular down under star Bruno Lawrence is cast as a vengeance-driven settler who makes it his personal mission in life to end Te Wheke's reign of terror. ~ Hal Erickson, Rovi

Connie Gilbert
as Woman By Fire

George Waaka
as James
View All

It's New Zealand's best film ever, at once culturally significant and broadly entertaining, melding American genre with New Zealand history to stunning effect.

There are no featured audience reviews yet. Click the link below to see what others say about Utu!