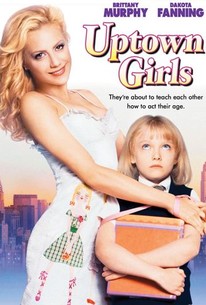 In this comedy from director Boaz Yakin (Remember the Titans), Brittany Murphy stars as Molly Gunn, the daughter of a dead rock star, who lives off her inheritance and has never worked a day in her life. When her father's estate is swindled away from her, Molly suddenly finds her life of luxury and excess pulled out from under her. Begrudgingly, she decides that she has to get a job and is hired as a nanny for Ray Schliene (Dakota Fanning), the daughter of record executive Roma Schliene (Heather Locklear). At first Molly can't shake her spoiled-brat personality, but eventually she and Ray discover that they have a lot in common and a strong bond is formed. Jesse Spencer plays Molly's boyfriend, and Donald Faison, who previously worked with Murphy in Clueless, plays another record executive who offers Molly a place to live until she gets on her feet.

Fisher Stevens
as Himself, Lui-même

Will Toale
as Briefs Model

Saucereyed and hedgehog-haired, Brittany Murphy thinks, wrongly, that she is adorably kooky as the party girl.

Though I found Mr. Yakin's direction unexpectedly imaginative, and the script often incongruously subtle, I couldn't get into the spirit of all the whimsy, the reason being the surprising lack of charm in the two leads.

Can two over-pampered but fundamentally lonely persons of the blonde female persuasion bond meaningfully with each other while shopping?

Yakin shuns caricature. His affection for all his feckless characters, even Fanning's narcissistic mom (Heather Locklear), is evident.

Combine two mannered performances with a script intent on achieving maximum cuteness, and you've got one wince-inducing sugar rush.

Although [Brittany] Murphy and [Dakota] Fanning click, the rest of the movie doesn't click with them and actually gets in the way of this delightful pairing.

The sheer charisma of the performances - from a screwball Murphy and a caustic Fanning - manages to float a sentimental script that frequently fizzes where it should pop.

Fanning practically dares the audience to throw sharp objects at the screen with her thoroughly obnoxious performance.

Brought down with emotional manipulation, melodrama, and just a bi-polar mood.

A good chick flick with some heartwarming scenes! A must see!

Act your age not your shoe size. Dakota Fanning reminded me of Christina Ricci from Addams Family. Her acting in this movie was spectacular. Brittany Murphy (R.I.P) was good as well. This was pretty enjoyable.