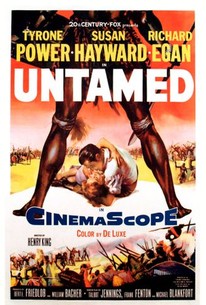 Tyrone Power is a Dutchman, and Susan Hayward is an Irish lass. If you believe that, then the rest of Untamed will go down a lot easier. Power is a Boer calvary commander attempting to bring peace to his South African homeland. He has an affair with Hayward, a married woman whose husband is killed during a Zulu attack. While rescuing the survivors, Power runs afoul of Dutch farmer Richard Egan, who insists that Hayward is his property. Egan turns bandit, targeting the diamond mines. Power is bound and determined to stop Egan--and, it is hoped, to clear the path towards lasting happiness with Hayward. The Untamed is a CinemaScope adaptation of a novel by Helga Moray.

The corn is even higher than an elephant's eye...

There are no featured audience reviews yet. Click the link below to see what others say about Untamed!