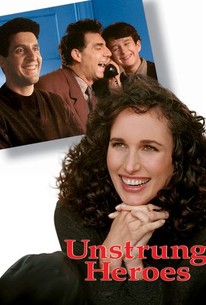 Critics Consensus: Sensitive direction and a terrific cast help Unstrung Heroes get at the heart of human grief -- and depict the relationships that can start the healing process.

Critics Consensus: Sensitive direction and a terrific cast help Unstrung Heroes get at the heart of human grief -- and depict the relationships that can start the healing process.

Critic Consensus: Sensitive direction and a terrific cast help Unstrung Heroes get at the heart of human grief -- and depict the relationships that can start the healing process.

Diane Keaton made her directorial debut with this drama, adapted from the autobiographical novel of sportswriter Franz Lidz. Lidz's story was set in his New York childhood and told of how living with his four eccentric uncles helped him overcome his grief at the death of his beloved mother. The movie is set in southern California and the four uncles from the novel have been whittled down to two. Lidz was christened Steven (Nathan Watt) and he is raised by the luminous Selma (Andie McDowell) and Sid (John Turturro), his father. When Selma is taken ill, Sid keeps Steven and his sister out of her bedroom, fearing they will upset her. Sid is an ingenious but cool-hearted inventor whose head is more developed than his heart. He sends Steven off to live with his two brothers. Danny (Michael Richards) is a high-spirited, paranoid man who suffers from delusions. Arthur (Maury Chaykin) is a big-hearted guy who likes to collect other people's junk. Together they rename the child Franz and teach him to value his own uniqueness.

Anne De Salvo
as May

Andrew Craig
as Man in Line

Unstrung Heroes has been directed by Diane Keaton with an unusual combination of sentiment and quirky eccentricity. There are moments so touching that the heart almost stops.

Quietly moving story of a boy dealing with loss.

A very touching film that features great performances all around. This is the type of movie you'll watch and wonder why you've never heard more about it.

Shows how misfits can be necessary spiritual teachers for youth coming-of-age.

Keaton's directorial debut is not bad but not great. I think she suffers from the same problem as Tom Hanks..the need to show something to be loved rather than something edgy. The result is passable stuff but not memorable stuff.