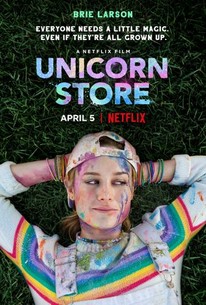 Critics Consensus: It'll be best enjoyed by audiences with a high tolerance for colorful whimsy, but Unicorn Store is easy to like -- and it suggests Brie Larson has a future behind the camera.

Critics Consensus: It'll be best enjoyed by audiences with a high tolerance for colorful whimsy, but Unicorn Store is easy to like -- and it suggests Brie Larson has a future behind the camera.

Critic Consensus: It'll be best enjoyed by audiences with a high tolerance for colorful whimsy, but Unicorn Store is easy to like -- and it suggests Brie Larson has a future behind the camera.

Kit (Brie Larson) is a lonely twenty-something dreamer who's reluctant to leave the comforts of childhood and fully embrace adulthood. But when art school sends her packing, Kit is forced to move back home with her parents and take a temp job in a boring office. Just when she's resolved to finally put her Care Bears aside and grow up, a mysterious salesman (Samuel L. Jackson) enters Kit's life and offers to give her childlike heart its greatest desire. Larson's directorial debut, with a script by Samantha McIntyre, is a love letter to everyone's inner child, and a reminder that no dream is impossible.

You can practically see the gears of Larson's earnest intentions straining to churn out an earned resolution for her heroine, but it's tainted by the botched coming-of-age lesson we all have to endure to get there.

"Unicorn Store" vanishes in a puff of smoke.

[Brie] Larson approaches Unicorn Store with such earnest emotion - both in her performance and the film's direction - that the film quickly becomes something much more.

It's more often than not something of a slog, its insights shrug-worthy and its tone jarring in its shifts from candy-coloured whimsy to weepy dramatics.

In fact, "Unicorn Store" becomes an argument for itself: If such a tacky fantasy can get produced, then clearly it's a viable enterprise for grown-ups.

Quirky to an extreme with not much to say about the millennial resistance to maturity.

As Brie Larson's directorial debut it is a glittery delight and definitely showcases her talent and hopefully future directing.

Maybe we should start celebrating how close we came to fulfilling our dreams more often - that might encourage us to not give up and find a way to realise them eventually.

Unicorn Store has a lot of magic, charm and heart, and although at times it becomes a little too fantastical, the character at its core and the journey she goes through provides an entertaining and investing watch.

Unicorn Store has so much going for it -a great cast, solid premise, an exciting director - but the magic falls flat. That's no fault of Brie Larson, whose endearing performance and uneven yet promising direction keep the movie afloat.

It may seem that McIntyre's screenplay may be a little heavy handed when signalling the male stereotypes but Larson's performance never makes Kit into somebody unrealistically naïve as she manages to maintain a hopeful outlook on life.

Quirky, weird and likable comedy about a very special young lady's dreams, goals and refusal to grow up. Reunites the dream team of Brie Larson and SLJ (long before Cap Marvel actually) in her directing debut. A pretty sweet and entertaining film that seems to be heading for a punchline that just doesn't come. But it's actually refreshing to have no sarcastic deconstruction or disenchanting twist. The most pleasant surprise is actually newcomer Mamoudou Athie with his great comedic delivery and chemistry with Larson.

I'm the type of person who will be all in on a film for being original and unique, regardless of the concept behind the film. For that reason alone, I found myself looking forward to one of Netflix's latest feature films in Unicorn Store. While I can't quite say it lived up to the promise that the trailer set in motion, I can say there are many positives to discuss and for those who do watch this movie, I believe it to be a good conversation starter. I really can't recommend this movie in general, but if you're a fan of quirky indie films with a whimsical feel, you may get a kick out of it. Let's dive in and discover what makes this movie as good as it is weird. Following Kit (Brie Larson) after she has failed Art school, she takes a temp job at an office, where she has a boring daily routine, making her wish she was still a child, who loved unicorns. Stumbling upon an invitation to a store run by a strange man, she is given a newfound promise that may have her being able to own her own unicorn. The premise of this film is very silly and would never happen in reality, but I feel as though the point behind the script was to get inside the head of this offbeat character and I feel the movie, as a whole, accomplished that. With all of that said, I believe the weakest aspect of this film is the store itself and the person running it, who is played by Samuel L. Jackson. Having shared the screen on numerous occasions, Jackson and Larson share some very enjoyable chemistry, but I feel that wasn't enough here to really sell me on the whole concept. Although I got the message the movie was trying to sell, his character, along with the idea behind the store he works at, just didn't quite work for me. The overall film worked more than this aspect, but it really detracted from the movie's entirety. Personally, I feel as though the themes presented throughout this film are very well thought out and play out well throughout the final act. I even found myself slightly tearing up throughout certain moments, but the overall impact of the emotional core is hurt by the overall story itself. That fact that I couldn't buy into certain things hurt my enjoyment, but I enjoyed the cast together as a whole. In the end, this is a very solid start for Brie Larson as a director and I believe she has enough talent to grow as a filmmaker in the years to come. She has incredible acting talent and the story surrounding her in this film really made for an enjoyable experience, but the second act really drags and makes the film feel very boring. That being said, the set-up is very well done and the conclusion of the film is quite satisfying, so for those reasons alone, I will give Unicorn Store a slightly positive score. A unique idea, buoyed by a mixed execution.