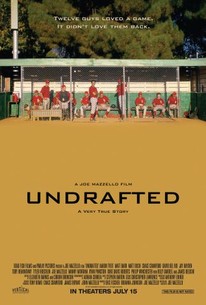 When twelve ragtag teammates set out to play what should be a meaningless summer intramural baseball game, it ends up becoming the most important game of their lives. This collection of characters - the reliever turned starting pitcher (Tyler Hoechlin), a hot dog power hitter (Chace Crawford), an outfielder with anger management issues (Joe Mazzello), a player coach with clipboard envy (Duke Davis Roberts), an over-eager catcher (Ryan Pinkston), the old guy who shouldn't be playing anymore (Philip Winchester), and the guy everyone forgot was on the team (Matt Bush) - truly gives new meaning to the phrase "amateur status". As they struggle to transition away from baseball and towards an uncertain future, the best player among them (Aaron Tveit) - who they all felt should have gotten drafted - has to deal with the news that his big league dreams were dashed, leaving him grappling with why he should still play. One game can be just another box score, but when it's played by a team galvanized around the love of the game, and for the pride they have in each other, it can define a lifetime. Written and directed by Joe Mazzello ("Jurassic Park", HBO's "The Pacific", "The Social Network"), UNDRAFTED is based on the real life experiences of Joe's brother, a collegiate baseball star who was skipped over in the Major League Baseball draft.

Despite cribbing from other baseball films, this is standard-issue sports fare that still seems intent on grafting unnecessary piles of story on top.

An amiable if aimless ensemble comedy that's unable to overcome its amateur status.

While it's touching that Mazzello has seen fit to celebrate his sibling's tenacious love of the national pastime, there's no escaping the fact that the dugout-and-diamond shenanigans are consistently tedious.

Mazzello pens a smart script worthy of a theater stage. Like its intramural baseball team, underdog film Undrafted captures the magic of a ball game and the price of big dreams.

The errors outnumber the hits in this heartfelt ensemble drama meant to pay tribute to the uniting power of baseball.

An itchy valentine to the world of intramural baseball, studying its humiliations, camaraderie, and gamesmanship with ultimate interest in its characters.

Despite the best efforts of a game cast, the movie definitely comes across as a bush-league effort.

Movies inspired by or based on a filmmaker's youthful life can be masterpieces...or, as in the case of the baseball comedy Undrafted, something that's heartfelt and personal and might have worked better as a drama but just isn't funny.

There are no featured audience reviews yet. Click the link below to see what others say about Undrafted!