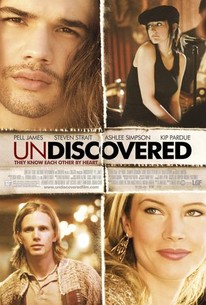 Critics Consensus: Undiscovered, a film about aspiring actresses and musicians, lacks originality and a convincing plot.

Critics Consensus: Undiscovered, a film about aspiring actresses and musicians, lacks originality and a convincing plot.

Critic Consensus: Undiscovered, a film about aspiring actresses and musicians, lacks originality and a convincing plot.

Two talented young people head to California looking for fame, but find love along the way in this romantic drama. Luke (Steven Strait) is a struggling rock musician who has decided to leave New York City for the seemingly greener pastures of Los Angeles. A few days before he leaves, he spots a beautiful girl on the subway who gives him a big smile, giving him brief second thoughts. However, Luke heads out to L.A. anyway, and after months of scuffling lands a gig -- and sees the beautiful girl, Brier (Pell James), in the audience. Brier is an aspiring actress who, like Luke, came to L.A. to boost her career; she's taking acting classes at a well-respected workshop, and has landed a less-than-glamorous but lucrative deodorant commercial. Luke and Brier strike up a friendship, though it's obvious he's interested in something deeper; as Luke tries to score a record deal, Brier and her best friend Clea (Ashlee Simpson) try to spruce up his image and create some buzz about his music. But as Luke falls hard for Brier, she develops greater qualms about getting involved with a musician who will spend half his life on the road, and their shared desire for that big break may be the thing that keeps them apart. Undiscovered also stars Carrie Fisher, Kip Pardue, and Fisher Stevens.

Stephanie Mace
as Waitress at Mint

Tyson the Skateboarding Bulldog
as Tyson

It may be a cheesy lark, but life bubbles through the cheese.

It isn't bad enough to be good.

Undiscovered feels more like a pilot for a glossy nighttime soap on Fox -- probably one that would be canceled midseason -- than a feature film with even a modicum of discernible originality or depth.

Undiscovered would like to think of itself as a gritty, documentary-style indie about hopefuls on the fringes of the industry, but it's more like one of those lame hair-metal bands that went out and bought flannel shirts after Nirvana hit it big.

Although it's all but forgotten before the fade-out, you don't rush to turn it off, either.

An enjoyably cheesy teen melodrama with a touch of indie edge.

Undiscovered has about as much emotional depth and romantic sensibility as an episode of a Simpson sister MTV reality show.

There is not a single moment in the undistinguished Undiscovered that will do for [Pell] James what those couple of compassionate, moving minutes do in Jim Jarmusch's [Broken Flowers].

How bad is it? Ashlee Simpson has a supporting role in it and her singing isn't the worst thing about it.

Undiscovered is a lifeless affair, as disinterested in its own characters as moviegoers are likely to be.

Some movies just deserve to be tucked away into obscurity. This is one of those movies.

I liked the songs and I especially liked the scene with the bulldog skateboarding, hehe. This was an ok movie about 2 aspiring artist trying to make it in the entertainment industry.

Tacky and criminally uninspired, Undiscovered tries to sing about authenticity and the will to ''keep on keepin' on'', but reveals itself to be completely manufactured. Every plot device can be seen coming from a mile away, and the dialogue's 'spiky' touches feels dreadfully superficial, particularly when it's spat out by model-looking actors that give their strict minimum at the service of stereotypical roles. If you think real life is like this, well, lap it up, but if you like your films with something called a personality, avoid this at all costs. But Ashlee Simpson, while I would never call her an 'actress', is not bad. Seriously.

I didn't expect much going in, but this movie was not too bad. It just didn't work as a comedy, and I know exactly why: the music. The soulful, easy listening rock was so wildly inappropriate and just killed the funny. There were some really good comedic performances, most notably from Strait and Pardue, that would have been hilarious under better music. They should have gotten the dude who did Arrested Development's music to score this. Once I realized the defect, I actually liked this movie. It really did get good near the end. The Ashlee Simpson factor kind of sabotaged this, but it's not unsalvageable. This flick is really not too bad.