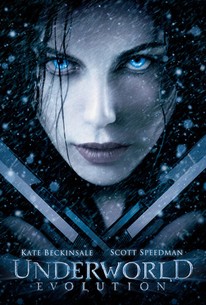 Critics Consensus: A visual and aural assault on the senses, this vampire-werewolf sequel makes a lot of noise and features a heavy-handed, overly convoluted story.

Critics Consensus: A visual and aural assault on the senses, this vampire-werewolf sequel makes a lot of noise and features a heavy-handed, overly convoluted story.

Critic Consensus: A visual and aural assault on the senses, this vampire-werewolf sequel makes a lot of noise and features a heavy-handed, overly convoluted story.

Tribes of vampires and werewolves battle for supremacy among the undead in this follow-up to the horror hit Underworld. Tracing the bloody history of the ongoing war between the Death Dealers, a gang of upper-crust vampires, and the Lycans, a pack of scruffy werewolves, Underworld: Evolution finds beautiful Death Dealer Selene (Kate Beckinsale) and hunky Lycan Michael (Scott Speedman) exploring their own pasts as well as those of their comrades in hope of uncovering the secrets of this centuries-old conflict. As Selene and Michael deal with their bloody legacy as well as their forbidden romance, the violence between the Death Dealers and the Lycans escalates in what may be the final face-off between them. Directed by Len Wiseman, who also helmed the first film, Underworld: Evolution also stars Shane Brolly, Bill Nighy, Tony Curran, and Derek Jacobi. ~ Mark Deming, Rovi

Christine Danielle
as Tanis Vamp No. 1

Kaja Gjesdal
as Tanis Vamp No. 2

Attila Lovaghy
as Tavern Cop No. 1

Alexander Grant
as Tavern Cop No. 2

Dany Papineau
as Death Dealer No. 1

Sean Rogerson
as Death Dealer No. 2

Christopher R. Sumpton
as Hero Black Wolf No. 2
View All

Underworld films are a highly specialized taste, and those who've acquired it know who they are. Everyone else should give this one a wide berth.

The plot is so convoluted that missing even five minutes at a stretch won't make any difference in your comprehension of the story.

The digital critters look much better than in the first film, it's fun seeing Derek Jacobi and Bill Nighy vamp it up, and the sight of Kate in that suit makes it worth squinting through all the murk.

I can't even begin to divulge the storyline because it's mostly unfathomable.

The murkily atmospheric sets resemble the ruins and prisons of Piranesi.

So dedicated to its ludicrously convoluted plot that it takes half an hour to explain what the hell is going on.

While it is still plagued by many of the same problems of the first film, Underworld: Evolution is generally an improvement over the original and an entertaining diversion.

Yes, I'll admit, it's better than the first film, but really not by much.

Overall, Underworld: Evolution is a vast improvement over its predecessor Underworld (2003), even if it generally suffers from the twin evils of stupidity and seriousness.

It never lives up to the potential of its premise about a centuries-old war between rival clans of vampires and werewolves.

...the series continues to squander its undeniably irresistible premise of vampires and werewolves duking it out...

"Underworld: Evolution" is just another generic sequel. It picks up right where "Underworld" ends, with Marcus(Tony Curran) awakening. Marcus then begins to hunt Selene(Kate Beckinsale) and her Lycon/Vampire hybrid lover Michael(Scott Speedman). There is some vampire vs werewolf action, but this is more of a vampire vs vampire movie. More action and gore(some actually very good gore scenes), and less story. There is some secrets revealed about their pasts, and the death of a couple key characters, but overall not an improvement over the first one. Sequels are rarely better, so it's not a big surprise that it comes up short. Still worth a watch if your a fan of the first one or horror movies, just keep expectations in check.

04/08/2011 (ONLINE) Super cool! Not many sequels can compliment their original films but this for me certainly did. Awesome stuff, vampires, werewolves and Michael the coolest hybrid. The action is there, the artistry looks fantastic the whole film is my kind of flick in this genre. Cool actors and a awesome lead actress to bring this story to life and giving me an exiting 2 hour break from reality. Watching this again has me swinging for the 4th installment and I cannot wait till I drench myself in another tale from the "Underworld".

[img]http://images.rottentomatoes.com/images/user/icons/icon14.gif[/img] Underworld: Evolution in my opinion is the best entry to the hugely succesful vampire vs lycan series. This first sequel has more of a plot than the original and the loud, fast paced, thrilling action sequences are still there to entertain. I was worried that Evolution was just going to be the first film done all over again but there's a good result of improvement in terms of plot, characterisation and even action sequences. Anyway, you still gotta love Kate Beckinsale in the most suited role she's ever played. This is a decent blockbuster that's faithful to the genre it's aiming to belong to.