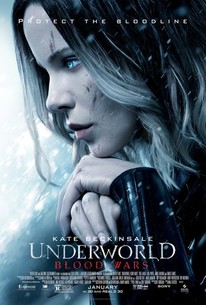 Critics Consensus: Underworld: Blood Wars delivers another round of the stylized violence that the series is known for, but -- like many fifth franchise installments -- offers precious little of interest to the unconverted.

Critics Consensus: Underworld: Blood Wars delivers another round of the stylized violence that the series is known for, but -- like many fifth franchise installments -- offers precious little of interest to the unconverted.

Critic Consensus: Underworld: Blood Wars delivers another round of the stylized violence that the series is known for, but -- like many fifth franchise installments -- offers precious little of interest to the unconverted.

The next installment in the blockbuster franchise, UNDERWORLD: BLOOD WARS follows Vampire death dealer, Selene (Kate Beckinsale) as she fends off brutal attacks from both the Lycan clan and the Vampire faction that betrayed her. With her only allies, David (Theo James) and his father Thomas (Charles Dance), she must stop the eternal war between Lycans and Vampires, even if it means she has to make the ultimate sacrifice.

Underworld: Blood Wars is the fifth instalment in the long-running B-movie vampire franchise that bizarrely, and appropriately enough, refuses to die.

Whoever wins, we snooze.

Possibly the nail in the coffin of this dreary vampire series.

Blood Wars is the fifth installment in the Underworld series. It is likely to prove largely incomprehensible to anyone who hasn't seen the previous four.

This has been a regular payday for Beckinsale and she certainly gives it her all, but you have to wonder why she bothers, certainly now that we know what she can do with more interesting material.

Coming off a long overdue reunion with Whit Stillman in the Jane Austen adaptation Love & Friendship, Kate Beckinsale returns here to the role that has been wasting her gifts as a comic actor for going on 14 years.

It's a sequel to skip.

Foester brings a different feel to the film than we have seen in its predecessors.

I find it staggering that this series has somehow spawned five actual wide-release films.

Some things will never change within the tedious and surprisingly long-running SF/horror saga 'Underworld' film franchise. Kinda makes you consider putting a stake through your own chest, huh?

Blood Wars is only 90 minutes long, but it plods along so aimlessly it feels way longer.

The fifth installment of the franchise, Underworld: Blood Wars is a contrived and pointless film. When the vampire clans face a relentless new enemy they offer renegade death dealer Selene clemency in exchange for training a new group of vampires to be death dealers. The plot is rather thin and doesn't make a lot of sense. And Kate Beckinsale phones in her performance, letting her stunt double to all the real work. Still, the fight scenes are well-choreographed and exciting (at times). Incredibly disappointing, Underworld: Blood Wars is a shallow and vapid action film that fails to revive the series.

Visually has a lot of the things Underworld is known for, but in terms of quality? Well if you liked Awakening, you'll like this. Because they're basically the same film. I for one liked neither.