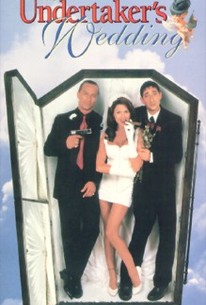 The mother of undertaker Mario Bellini (Adrien Brody) would like to see him married, but the ladies aren't especially entranced by his funeral parlor -- where profits are soaring due to an ongoing mob war. To bring peace, Alberto (Burt Young), boss of the Strachitella family, has his gun-wielding brother Rocco (Jeff Wincott) bumped off. But it's only a staged death, and Mario is told to hide Rocco at the funeral home. Mario takes an interest in Rocco's wife Maria (Kari Wuhrer). Rocco can't keep away from Mario's girlfriend Louise (Holly Gagnier). Maria goes into a murderous rage when she discovers Rocco has been cheating on her. She kills her husband, and then turns to Mario for help. Shown at Montreal's 1997 World Film Festival.

Nilo Picchi
as Priest
View All

Critic Reviews for The Undertaker's Wedding

There are no critic reviews yet for The Undertaker's Wedding. Keep checking Rotten Tomatoes for updates!

There are no featured reviews for The Undertaker's Wedding at this time.