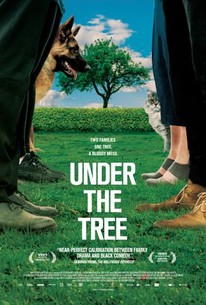 Critics Consensus: Under the Tree leads viewers into decidedly bleak territory, but it's leavened by sly intelligence and a surprising sense of humor.

Critics Consensus: Under the Tree leads viewers into decidedly bleak territory, but it's leavened by sly intelligence and a surprising sense of humor.

Critic Consensus: Under the Tree leads viewers into decidedly bleak territory, but it's leavened by sly intelligence and a surprising sense of humor.

Under the Tree (Undir trénu) Videos

UNDER THE TREE follows a man who is accused of adultery and forced to move in with his parents. While he fights for custody of his four-year-old daughter, he is gradually sucked into a dispute between his parents and their neighbors over an old and beautiful tree. What starts as a typical spat between suburban neighbors unexpectedly and violently reaches a boiling point, soon spiraling out of control.

News & Interviews for Under the Tree (Undir trénu)

Ant-Man and the Wasp Is Certified Fresh

View All Under the Tree (Undir trénu) News

Critic Reviews for Under the Tree (Undir trénu)

This is a cracking film, though the good people of the Icelandic tourist board may be holding their heads in their hands.

It's a striking, if slightly silly, curio from the writer-director Hafsteinn Gunnar Sigurdsson: 85 minutes of Bergman-lite topped off with five minutes of Tarantino.

Opts for Grand Guignol over subtle nuance, but entertaining nonetheless.

Sigurðsson is no misanthrope and his humane message - that everyone is muddling along as best they can - makes all the feuding and bile easier to stomach.

Under The Tree is a macabre and darkly funny slice of Icelandic noir - a bit like Fargo done Reykjavik-style.

Imagine a Mike Leigh film with fangs, directed in a style of Nordic deadpan.

The movie's humor is cooked at low temperature, discreetly, with small explosions of cruelty.

A deliciously dark satire that examines the fragile nature of civility in a suburban setting, where it can take very little to provoke savagery and the collapse of a delicate social order.

Like something from Fargo, you'll laugh, feel bad for laughing, and then laugh again, with the crisp but stylish cinematography and direction also bringing to mind the same Coen classic.

While some of the story seems a bit contrived, the overall plot of the film is solid and believable. The characters are well defined and the actors are all quite convincing.

I'll bet you think that Iceland is one of the world's happiest, most civilized places. This dramedy uses wry humor and deadly conflict to ratchet the suspense and counteract your trust.

A well-made but too nasty for my taste Icelandic black comedy about a festering feud between neighbors over a tree.

Audience Reviews for Under the Tree (Undir trénu)

There are no featured audience reviews yet. Click the link below to see what others say about Under the Tree (Undir trénu)!

Under the Tree (Undir trénu) Quotes