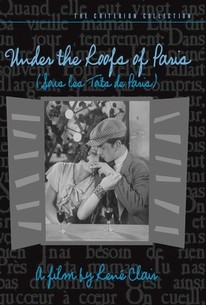 Rene Clair's Under the Roofs of Paris is one of the first French films shot in sound. The film is a relaxed melodrama where a Parisian street singer (Albert Prejean) and his friend (Edmond Greville) pursue the love of the same woman (Pola Illery). Clair chose to use sound only when needed, preferring to tell the story through his visuals as well as through his dialogue. The result is a striking film, boasting beautiful photography and sets, as well as a moving story. ~ Stephen Thomas Erlewine, Rovi

Paul Olivier
as The Drunk

Practically nothing else of importance happens, and yet the director has managed to wind together a film that holds and never lags.

This picture becomes somewhat tedious after the first half. The introductory scenes, however, are highly satisfactory, particularly when M. Clair has a fancy for a little irony.

A small jewel that won't need to be adapted or subtitled because the dialogue is very brief and intelligible for anyone. [Full Review in Spanish]

The dawn of French talkies

A slight but charming bittersweet romantic comedy set in the streets of Paris.

The story is largely inessential, however. What counts -- apart from the glimpse into a long-vanished world and the remarkable technique of the film -- is how surprisingly compelling the lives of these characters are.

Billed upon its release as "the most beautiful film in the world," Under The Roofs Of Paris may well have fit that description -- at least at the time.

It's all beautifully photographed to be sure, but also rather slight.

initial revelation of Paris 'with its warts'

Compared to his contemporaries Jean Renoir and Jean Vigo, Clair was a minor talent, though both of these films do contain innovative uses of sound mixed with silent film.

Like a good wine, there's a bouquet preserved here, a joyously French 'April in Paris with Chevalier and a beret' spirit accented by antiquarian Parisian scenes from c. 1929, never mind that they were studio-bound.

Director Rene Clair peaked with "Le Million" and "A Nous la Liberte" in 1931, but the previous year's "Under the Roofs of Paris" was a solid step toward those twin glories. Unfortunately, the plot of "Paris" is trivial -- just a dull neighborhood tale of a street singer, his best friend and a crook competing for the same pretty girl. But the music is what's most hard to swallow. Anyone not sentimental for wheezing Parisian accordion will cringe through these moldy tunes. And the singer's money scheme -- leading curbside sing-alongs in the hopes of peddling sheet music -- is also horribly archaic. Really, "Under the Roofs of Paris" is only notable as filmmaking. It's obviously an early talkie and, in every scene, Clair aggressively wrestles with the new technology. The line between experimentation and mere frugality isn't so clear -- many scenes take convenient shortcuts, like when inaudible dialogue in a bar seems drowned out by nearby music. Except the music has been added to silent footage in post-production, only simulating a "live," diegetic soundtrack. Such quirks are common throughout the film. Clair was ambivalent about the arrival of sound, and he steadily tweaks the medium here. Other twists include a morning alarm that is turned off by touching a shoe, a scratched "William Tell Overture" record used as score and an important fight scene that is silent except for irrelevant train noises. The momentum tends to shut down when a rare conversation occurs. And the acoustics aren't right, due to primitive miking and shooting "outdoor" scenes inside a studio. "Under the Roofs of Paris" is one of those films that's revered more because it was ahead of the curve than because it was actually so great.