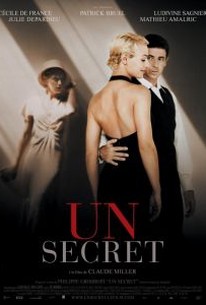 Critics Consensus: A Secret is poignant, sad, and beautifully crafted, featuring fine performances that stave off a drift toward soap opera territory.

Critics Consensus: A Secret is poignant, sad, and beautifully crafted, featuring fine performances that stave off a drift toward soap opera territory.

Critic Consensus: A Secret is poignant, sad, and beautifully crafted, featuring fine performances that stave off a drift toward soap opera territory.

Informed that his elderly father has mysteriously disappeared, anxious Parisian François (Mathieu Amalric) recalls his tragic family history in director Claude Miller's adaptation of the fact-based novel by author Philippe Grimbert. As a sickly young child, François (Valentin Vigourt) instinctively knew that he was a disappointment to his champion swimmer mother, Tania (Cécile De France), and gymnast father, Maxime (Patrick Bruel). While François does find some amount of solace in his friendship with kindly masseuse Louise (Julie Depardieu), his discovery of a strange toy in the attic causes his parents to act more strangely toward him than ever before. Feeling sympathetic toward the young boy, Louise eventually reveals to François that he once had a half brother, and that his parents weren't drawn together by fairy-tale romance but through violence and strife. Back before the war, Maxime became engaged to the beautiful Hannah (Ludivine Sagnier). While Hannah's parent's were keenly aware of the ominous implications of Hitler's rise to power, Maxime worried little since he always considered himself French first and foremost. At the wedding, however, Maxime finds his gaze frequently wandering from his fetching bride to athletic beauty Tania. Later, after the happily married bride gives birth to a handsome young boy named Simon (Orlando Nicoletti), the Nazis invade and the once-happy family is torn violently asunder.

The title of this movie suggests the difficulty in writing about it. You can't reveal a secret without spoiling it, and in this intriguing, complex family drama spread out over several time frames covering half a century, the secrets keep on coming

A structural mess that turns contrived just when it should be hitting home.

A Secret is a showcase for great acting.

A fine drama that stands as Gallic vet Claude Miller's best in at least a decade.

A blue-chip cast and handsome stagings do little to prevent this French movie being a muddled, pretentious washout. Substantial re-editing might have helped.

It's such a handsomely mounted and well-acted piece that few serious cinema-goers are likely to mind the circuitous path it takes in getting there.

It is a deeply moving and heartfelt story that makes an indelible impression on the viewers' hearts and minds.

In Un Secret, French filmmaker Claude Miller expertly weaves together a family history, merging the personal and political, the celebratory and the tragic, while incorporating three distinct time periods.

Sagnier beautifully plays the most crucial moment. She's part of a fine ensemble cast that somewhat obscures the heavy-handed symbolism and punch-pulling finale.

Avoiding histrionics and overstatement, Un Secret reveals a story about a family's past suffering that may not be unique, but in this telling is quietly powerful.

Miller's lyrical use of fleshy details, such as the way de France's black bathing suit clings to her proud body, brings his movie a tactile humanity.

Nothing extraordinary or a secret that most can't see coming, yet I liked it. Maybe because besides being based on real events, the execution too was good enough & that it's not just a Holocaust/war movie.

A rather slow moving, nice French film about the holocaust, and its effects on an entire family. The movie is rather tedious, even as it portrays deep passions, and grief, flickering just below the surface of its characters. However, the acting is wonderful, and all else is beautifully done....so I forgive them.

Est-il juste parce qu'il est Francais? Based on a true story, Un Secret sees post-war France through the eyes of pre-teen Francois, an only child of two ridiculously good-looking parents. When he becomes curious about the inner workings of his parents' relationship, a close friend reveals secrets about the multi-layered and convulated love affair that began 15 or so years earlier, and the consequences (some fatal) that occurred because of it. The film captures the complexities of being a Jew in France from the 1930's to the present, where layers of a family's history are revealed by jumping back and forth in time. It's about a gripping mystery and an ever-timely reminder of the terrible power of repression and silence. Beautifully acted and exquisitely photographed, director Claude Miller's superb drama is awash with the ripples created by unlived lives. He brings together beautiful actors, great sceneries and thought-provoking stories but misses the mark in the alignment of all the elements. Still, the performances of all the cast are compassionate and compelling. The cinematography for the most is absolutely gorgeous. But it seems that Miller has cheapened the audience's experience, for rather than exploring the entire body of one or two stories, he merely nibbles at the ear of many. And again, what is with the bizarre epilogue?

[font=Century Gothic]In "A Secret," it is 1955 and Francois(Valentin Vigourt) is a bookish seven-year old boy who comes as something as a disappointment to his athletic parents(Patrick Bruel & Cecile De France), spending most of his time at the home of Louise(Julie Depardieu), a doctor and family friend who injects him with daily vitamin shots. Therefore, Francois imagines having an older brother who is everything he is not.[/font] [font=Century Gothic][/font] [font=Century Gothic]It is 1985 and Francois(Mathieu Amalric) is a doctor who works with the handicapped. One day, he receives word that his father's dog has died and that he is missing from home.[/font] [font=Century Gothic][/font] [font=Century Gothic]"A Secret" is an intelligent movie about identity with a fine cast that while moving back and forth in time, manages to return to the same point in space.(Speaking of which, it is interesting to see Ludivine Sagnier not to play the sexpot for a change...) Much of Francois' day dreams make sense, considering they probably originate from snatches of overheard conversations between his parents over the years. As good as the movie could have been, it is marred by two obvious flaws. First, there is the central incident which comes late in the film, so I will not spoil it except to say that I believe the correct turn of phrase is cutting off the nose to spite the face. Since the resolution of the movie hangs on this one scene, then it is very important that it be credible. Of which I have my doubts, even though the movie's central story is based on a true story. So, did this really happen? Second, Francois(who is probably scarred for life from seeing his parents have sex) boils the entire Holocaust down to people having more love for their pets than their fellow human beings. He is right that this is definitely a misplacement of priorities but not a very serious one and he has it the wrong way around, anyway.(He is also wrong about his father. In mourning the death of his dog, old memories are suddenly brought to the surface, much like with the stuffed toy thirty years previously.) The Nazis(and any other genocidal maniacs, for that matter) lowered their intended victims to the level of animals, so as to make it that much easier to kill them. [/font]