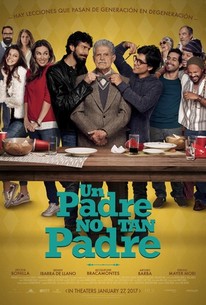 Set in the stately and majestic colonial city of San Miguel de Allende, this quirky comedy starring Héctor Bonilla, Benny Ibarra de Llano, Jacqueline Bracamontes and Sergio Mayer Mori, follows 85-year old Don Servando Villegas (Héctor Bonilla,) an old fashioned Mexican patriarch who gets kicked out of his retirement home for bad behavior. When his estranged son, Francisco (Benny Ibarra de Llano) is forced to take him into the house full of hippies he shares with his girlfriend and young son. "New age" collides with old age as Don Servando and his son Francisco experience a series of conflicts and situations that puts their home's stability in jeopardy. Un Padre No Tan Padre is a story about family: the one we're born into and the one we create along the way.

Octavio Anza
as Homero
View All

Resident Evil: The Final Chapter Will Please Fans but Few Others

The characters are fully rounded, and you wind up emotionally invested in them.

A film that gets better at the end, but it's not enough to save it. Too bad because it had more to offer. [Full review in Spanish]

A decent film with great performances and a warm story. [Full review in Spanish]

Within its genre and its proposal the film is familiarly fun, you see it, you forget, but it entertains you. [Full review in Spanish]

A comedy that, although it follows a well-known formula, works as a light entertainment. [Full review in Spanish]

A film in which the development of its character responds more to the need to please the viewer than to a true character growth. [Full review in Spanish]

There are no featured audience reviews yet. Click the link below to see what others say about Un Padre No Tan Padre!