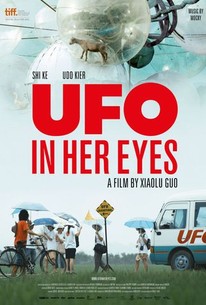 UFO in Her Eyes Photos

Simple woman Kwok Yun leads a peasant's life in the peaceful mountains around remote Three-Headed Bird Village. One day, after a countryside tryst with a married man, Kwok Yun sees a UFO - a giant glowing thing in the shape of a dumpling! The ambitious village leader Chief Chang uses Kwok Yun's unexpected events for political gain. She stimulates tourism with UFO tours and gets the local economy roaring with progress. Busy aspiring to strengthen relations with the USA, she is blind to the dangers such radical change can bring, especially to the environment. She is promoted and groomed for a bright new future by pushy Chief Chang. But Kwok Yun's heart is whispering that she's destined for something more than the government's power-hungry plans... -- (C) Official Site

Critic Reviews for UFO in Her Eyes

A mixture of droll political satire, lyrical visuals, and dolorous mood make for an uneven but lingering sketch of a China that feels increasingly present yet still rarely seen.

The serio-comic technique and ping-ponging aesthetics ultimately make for a winning approach.

There are no featured reviews for UFO in Her Eyes at this time.

UFO in Her Eyes Quotes