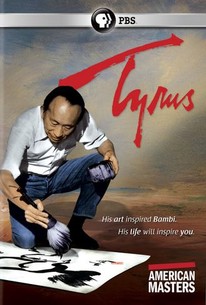 TYRUS examines the life and work of pioneering Chinese American artist Tyrus Wong. Beginning with his arrival to the immigration detention center at Angel Island in 1919, nine year old Tyrus would overcome a life of poverty, racism, and discrimination to become a renowned painter and Hollywood sketch artist. The film will show how the quiet beauty of Tyrus's eastern influenced paintings caught the eye of Walt Disney and became the inspiration for the classic animated feature Bambi. For the next 25 years, Tyrus brought his artistry to Warner Brothers where his striking storyboards and set illustrations helped set the tone and drama for films such as The Sands of Iwo Jima, Rebel Without a Cause, William Goldman's Harper and Sam Peckinpah's The Wild Bunch. At 104, Tyrus is the oldest living Chinese American artist.

Tyrus is unlike Tyrus, though, in the film's seeming discomfort with the ambiguity that its subject so treasured. Tom relies on narrative crutches that deny the unique elements of cinema.

As cinema, Tyrus is a polished, straightforward biography in the American Masters style, but two factors render it fascinating. First, there's the highly likable title character... Second, there's the chance to see his paintings.

There are no featured audience reviews yet. Click the link below to see what others say about Tyrus!