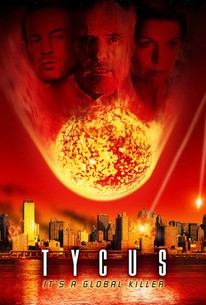 In this sci-fi drama, Dr. Peter Crawford (Dennis Hopper), a gifted astronomer, discovers that a massive comet is heading toward Earth. Convinced that a major disaster is imminent, Crawford attempts to convince the world's scientific minds that drastic steps must be taken. No one appears to agree with him, so he begins constructing an underground city, which he plans to populate with a cross-section of intelligent people who will be able to reconstruct civilization after the comet destroys the cities. Jake Lowe (Peter Onorati), a down on his luck photojournalist, gets wind of Crawford's plan and attempts to join the underground community to get the full story from the inside. Tycus also features Finola Hughes and Chick Vennera. ~ Mark Deming, Rovi

Tommy Hinkley
as Pilot
View All

There are no critic reviews yet for Tycus. Keep checking Rotten Tomatoes for updates!

There are no featured reviews for Tycus at this time.