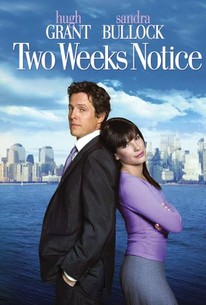 Critics Consensus: Though Two Weeks Notice has nothing new to add to the crowded genre, Hugh Grant and Sandra Bullock make the movie a pleasant, if predictable, sit.

Critics Consensus: Though Two Weeks Notice has nothing new to add to the crowded genre, Hugh Grant and Sandra Bullock make the movie a pleasant, if predictable, sit.

Critic Consensus: Though Two Weeks Notice has nothing new to add to the crowded genre, Hugh Grant and Sandra Bullock make the movie a pleasant, if predictable, sit.

A woman finds herself attempting to foil one office romance while debating if she should take a chance on another in this romantic comedy. Lucy Kelton (Sandra Bullock) is a top-flight attorney who has risen to the position of Chief Legal Counsel for one of New York's leading commercial real estate firms, the Wade Corporation. However, Lucy's job has one significant drawback -- George Wade (Hugh Grant), the eccentric and remarkably self-centered head of the firm. George seems entirely incapable of making a decision without Lucy's advice, whether it actually involves a legal matter or not, and while she's fond of George, being at his beck and call 24 hours a day has brought her to the end of her rope. In a moment of anger, Lucy gives her two weeks notice, and George reluctantly accepts, under one condition -- Lucy has to hire her own replacement. After extensive research, Lucy picks June Carter (Alicia Witt), a Harvard Law graduate determined to make a career for herself. Lucy soon begins to suspect, however, that June plans to hasten her rise up the corporate ladder by winning George's hand, leaving Lucy to wonder if she should warn George about his beautiful but calculating new attorney -- and whether she should tell George that she has finally realized she's in love with him. Two Weeks Notice was written and directed by Marc Lawrence, who had previously scripted two other box-office hits for Sandra Bullock: Miss Congeniality and Forces of Nature. ~ Mark Deming, Rovi

Tim Kang
as Paul the Attorney

John Cunningham
as Justice of the Peace

David Aaron Baker
as Man Getting Into Cab

Mandy Siegfried
as Hana the Hostess

Mike Piazza
as Himself

Donald Trump
as Himself

Norah Jones
as Herself

William Thourlby
as Man In Elevator

Elizabeth Owens
as Woman In Elevator

Structurally, the film's off-kilter. The start of the relationship is rushed through, while the supposedly crucial notice period feels increasingly directionless. Which leaves the comic strand - and that, by and large, delivers.

The spark isn't there and the soufflé doesn't rise.

They may not be history's most predictable pairing but Bullock and Grant turn out to be a natural fit, in an Odd Couple kind of way.

This is the kind of movie where the big scene is a man shot out of a cannon into a vat of ice cream.

According to the script, Grant and Bullock's characters are made for each other. But you'd never guess that from the performances.

It is not so bad as to make you dash for the door. But you would not have missed much if you never entered the hall at all.

everything a romantic comedy is supposed to be

Two icons of romantic comedy team up for the first time, and the result is a fizzle.

Two Weeks Notice is basically saved by the really good actors in it, especially Grant and Bullock. There are some laughs here and there, but there's nothing remarkable about the film so this is standard rom-com entry.

This was before I found Sandra Bullock attractive. Hugh Grant is serviceably dapper. Oddly enough, years after I saw it for the first time, I still remember the beginning and ending with Lucy ordering enough Chinese food to feed a small village to reveal it was only for one, then at the end, for two. Aww.

Nice chemistry between Hugh Grant and Sandra Bullock. I like the relationship between Bullock's character and her parents; how she couldn't escape the noose, er, I mean, the umbilical cord. I like the message: you can do a lot of good with a vision and a lot of money. I wish Grand and Bullock would do more together because their quirky styles really gel, in my opinion.