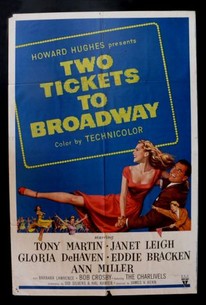 Personally supervised by Howard R. Hughes, the RKO Technicolor musical Two Tickets to Broadway stars Janet Leigh as a small-town girl who hopes to make it big in the Big Apple. Moving into a Manhattan boarding house populated by such showbiz hopefuls as Ann Miller, Tony Martin, Gloria De Haven and Barbara Lawrence, Leigh aspires to appear on the popular TV variety program hosted by bandleader Bob Crosby. Two-bit agent Eddie Bracken promises to make her dreams come true, even though he doesn't know Crosby from Adam. Along the way, Leigh falls for Martin, though the course of true love seldom runs smooth--in fact, at one point it threatens to run all the way back to Leigh's home town. Injecting their time-honored routines into the proceedings are veteran vaudevillians Joe Smith and Charlie Dale, playing a couple of stagestruck deli owners (their roles were originally slated for Stan Laurel and Oliver Hardy, but Laurel's illness precluded any film work). Despite the creative input of choreographer Busby Berkeley, the film's best number is the simplest: Let's Make Comparisons, wherein Bob Crosby explains why he's not his brother Bing. Seemingly a surefire box-office hit, Two Tickets to Broadway inexplicably posted a loss of $1,150,000.

Bob Crosby
as Himself

Michael Lally
as Man with Tuxes

Bennett Green
as Man with Tuxes

There are no critic reviews yet for Two Tickets to Broadway. Keep checking Rotten Tomatoes for updates!

There are no featured reviews for Two Tickets to Broadway at this time.