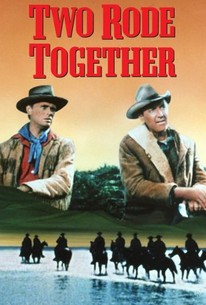 Guthrie McCabe (James Stewart) is the sheriff of a town near an army outpost. Lieutenant Gray (Richard Widmark) recruits Guthrie to help rescue the children of white settlers who have been kidnapped by the Comanche Indians. He agrees for two reasons. The first, local saloon owner Belle (Annelle Hayes) has her matrimonial eye on Guthrie. The second reason is the $500 per person reward for bringing the kidnapped victims back to the fort. The sheriff and the lieutenant ride off to meet the Indians in this film directed by John Ford.

Critic Reviews for Two Rode Together

This is studio moviemaking at its slackest.

Ford may have made it for a quick buck—or perhaps as a favor to Columbia chief Harry Cohn—but the impact of the resulting film is far more that of a provocative drama than a tossed-off oater.

Ford fails to make his racism theme work in the same powerful way he did in The Searchers.

Audience Reviews for Two Rode Together

John Ford reboots The Searchers, this time dividing the action between Richard Widmark and Jimmy Stewart, two established commodities, instead of John Wayne and newbie Jeffrey Hunter. The result is more scattered but more of a buddy movie, which the two particulars achieve pretty well. Its engaging for that reason. Interestingly, Ford chooses black guy Woody Strode to play "the bad Indian". What the hell is that all about?