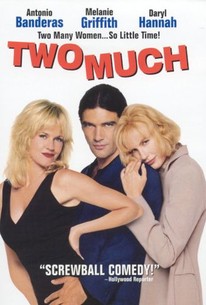 This Spanish-American production stars Antonio Banderas and Melanie Griffith, whose romance on the set helped the film set box-office records in Spain. Director Fernando Treuba, who won an Oscar for Belle Epoque, made his English-language debut with Two Much, an updated screwball comedy. Banderas plays a con artist appropriately named Art Dodge. Joan Cusack plays his assistant, Gloria. They specialize in convincing recently widowed women that their husbands ordered an expensive painting before their death. One day, Art tries to work his scam at the funeral of mobster Gene Paletto's (Danny Aiello) father. Gene is outraged by Art, even more so after he steals away his ex-wife, Betty Kerner (Melanie Griffith). Betty quickly falls for the handsome Art and plans to marry him, but he is soon distracted by her beautiful sister, Liz (Daryl Hannah). In order to woo both women, Art disguises himself as fictional brother Bart by removing his ponytail and putting on glasses. Art/Bart switches identities and hops from bed to bed while being pursued by Gene and other mobsters.

David Mora-Arriaga
as Mariachi
View All

Critic Reviews for Two Much

Too Much is a screwball comedy in every ounce of its being. A bad one, true, but screwball all the same.

Too much to endure

Audience Reviews for Two Much

This was a quite funny Movie.