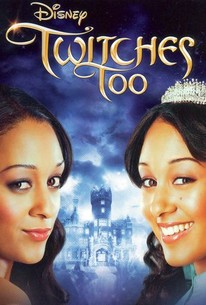 In this sequel to the enchanting Disney Channel original movie Twitches, the twin daughters of Aron attempt to ensure that the forces of darkness have truly been defeated. The Kingdom of Coventry has been locked in battle against the forces of darkness for over two decades. Now, just as it begins to appear as if the powers of light are about to be snuffed out by the surrounding shadows, the twin daughters of Aron suddenly re-appear in the land of their birth - just as the prophecies foretold. Could it be that these magical twin sisters are in fact the heroes prophesized to return to Coventry and deliver the land from an evil powerful enough to consume anything in its path?

Critic Reviews for Twitches Too

The trusty themes -- personal responsibility, the sanctity of friendship and family, self-trust -- are all too pat and obvious here; the personal journey is not so much a journey as a jaunt through predictable plot points and a few minor special effects.

Tia and Tamera Mowry are definitely likable on screen, and they are still working well as twin actors, which is more than I can say for the Olsen twins.

...slightly better than its disastrous predecessor...

Audience Reviews for Twitches Too

There are no featured audience reviews yet. Click the link below to see what others say about Twitches Too!