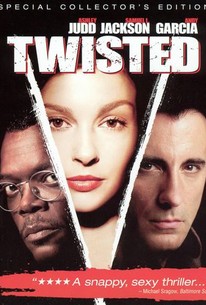 Philip Kaufman directs the detective thriller Twisted (originally to be titled The Blackout Murders), with a script by up-and-coming filmmaker Sarah Thorp. Ashley Judd plays troubled police detective Jessica Shepard, who works under the jurisdiction of the man who raised her as his daughter, police Commissioner Mills (Samuel L. Jackson). While investigating a serial murder case, Jessica -- who is has a proclivity for dangerous, drunken one-night-stands -- discovers that all of the victims are men whom she's recently bedded. Complicating matters are her bitter ex-boyfriend (Mark Pellegrino), her very curious therapist (David Strathairn), and her odd-behaving new partner Mike Delmarco (Andy Garcia).

Joe Drago
as Man at Bar

Ofri Fuchs
as Girl at Saloon

Garrett Townsend
as Man at Saloon

Geoff Callan
as Detective
View All

It's sad to see the director of The Right Stuff and The Unbearable Lightness of Being reduced to this.

This thriller seems most interested in lingering over battered and bloodied male faces.

Sarah Thorpe's screenplay is a compendium of by-the-book clichés; Kaufman's direction leaves the material stranded in a limbo between po-faced and trashy; Judd's approximation of drunkenness is worrying to behold.

The outdated, cliche-riddled direction is so inept and indifferent that it's hard to believe Twisted was lensed by the same Philip Kaufman who made The Right Stuff.

A suspense thriller without thrills or suspense.

Judd is let down by Twisted because tearful, confused victim doesn't come naturally to her; she's not fun to watch suffer if you can't see her calculating the payback.

At least the performances are solid.

Overcooked dialogue, some wildly implausible story devices, and a dearth of remotely likable characters, and Twisted is a crime story that just doesn't pay.

Twisted is so bad I'm embarrassed to have seen it and therefore am a bit ashamed to write even an unkind review.

Just like nearly all of Judd's past entries in the genre, this film isn't great, it's just average.

Very average thriller with who cares ending. I gave it an extra star for Ashley, as I always think she is quite good. Story here is just a bit flat and surprisingly dull.

Who done it? Typical in you know there is "twist" coming, but still enjoyable. Something felt very 1990s about the whole movie.

Twisted is your typical thriller that has a obligatory, game-changing twist at the end. Ashley Judd is as gorgeous as always, while Garcia and Jackson phone-in performances that really don't require a lot of effort from them. There's nothing new here, and the "why" of the murders wasn't really explained to my satisfaction, but whatever. You know if you like these kinds of movies or not, and if you you do, then Twisted is worth watching on TV (or picking up at the store for $5, like I did).

A film with a lot of talent which can't get over a very bad script. First of all it throws out some excellent ideas of how everyone is a killer, it's just about control, but soon gets swept away with "could it be him?" crapness. Constantly it sheds a shadow over characters, all except one. Could this one person be the killer? You decide. The performances are great, especially Strathairn and Garcia but they have no other purpose than to be suspects in a film more focussed on giving a "never see it coming twist" than a logical conclusion. Some laughable dream sequences round out this poor attempt at psychological horror.