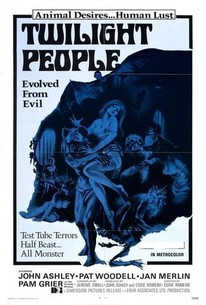 Dashing adventurer Matt Farrell (John Ashley) is captured and taken to a remote island in the South Pacific, where he is meant to become the newest victim of Dr. Gordon (Charles Macaulay), a mad scientist who is crossing humans and animals in an attempt to create a race of "superbeings." The doctor's daughter, Neva (Patricia Woodell), is assisting in the nefarious experiments, though she has begun to doubt the legitimacy of her father's scientific work. Gordon's main henchman, Steinman (Jan Merlin), would like nothing more for Farrell to escape, as he views the handsome captive as a worthy adversary and longs to track him through the jungle as human prey. When Neva falls in love with Farrell, she betrays her father and frees him, fleeing with a group of Gordon's experiments, bestial homo sapiens who have been crossed with bats, panthers, antelopes, and other animals. Meanwhile, Farrell captures the doctor and makes his way through the jungle to meet up with Neva on the island's dock, where they intend to make their way to freedom.

That bat-man is pretty cool, though.

Bless the folks at VCI Home Video who still know how to have a good time. The Twilight People is about as awkward and incompetent a monster movie as one could imagine.

There are no featured audience reviews yet. Click the link below to see what others say about Twilight People!