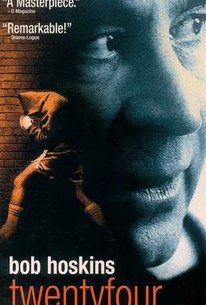 In this debut feature film from young British writer-director Shane Meadows, an unemployed ex-boxer, Alan Darcy (Bob Hoskins), borrows money from a gangster to set up a boxing club in his small, gritty English city. Darcy narrates the story from his diary notes. Boxing saved him from a wasted youth, and Darcy promotes the idea to the town fathers as a gang-prevention strategy. The town's economy is in shambles and the young men have nothing to look forward to. Darcy gives them a reason to live and a dream, converting their violent energy to sport and fostering a sense of camaraderie and sportsmanship. First he wins them over by playing soccer with them, then he lures them into his lessons on boxing. He drives them hard to prepare them for their first match, against boxers from a rival local team. Darcy has the team poised to win when one of his best fighter's parents threatens to pull him from the match.

Tanya Myers
as Sally the Judge

John Baxter
as Man Outside Shop

Shane Meadows
as Man With Saucepan on Head

There's a certain humor in the boxing sequences (the first match turns into a brawl), and a good feeling for local color. But the personal tragedy of the Hoskins character evolves unconvincingly from the story of the boxing club.

It follows the familiar formulaic path of Brit working-class films of the 60s, but has less edge than those films.

Conveys the challenges and difficulties faced by all who dare to make the world a better place.

Certainly worth seeing for its understated portrait of working-class alienation and for the enthusiasm and soul Hoskins brings to his goodhearted, hopeful character.

Touching performance from Bob Hoskins and a witty script make for a low key gem.

Twentyfourseven is another gritty urban tale from Shane Meadows, and tells the story of Darcy, a man trying to organize a small inner city boxing club to teach the local lads self respect and keep them out of trouble. This being a Shane Meadows film, you know going into it it's not going to be one of those typical formulaic feelgood sports movies that plague modern cinema. In fact as I watched the camaraderie and respect grow between the lads, I was just waiting for the ACME anvil to land on my head! And so it did, but not in the painfully depressing way one might expect. Although Meadows thankfully sidestepped the usual cliches and brought an element of grim reality into play, it still manages to end on a comparatively positive note without resorting to the usual sentimental slop. Hoskins is as good as always as the small man trying to make a difference in his small corner of the world, and it's nicely shot in atmospheric documentary style black and white. Yet another quality film from the best film maker currently working in Britain.

Admittedly not in the same league as other 'Shane Meadows' films in my opinion, but enjoyable all the same. It didn't tend to hold my attention, the way the others did and I'm not sure if the characters were developed to the full potential, that being said, it would be hard to pull off a 4/5 star film every time and so I think this one of those 'watchable' ones, rather than a 'must see'. Special Features, however, has a short film by Shane Meadows starring the brillient Paddy Considine called 'Three Tears for Jimmy Prophet', which shows again Paddy's versitility and acting ability. VERDICT: Forget it's a Shane Meadows film and and watch it if it comes your way

Fucking fuck! Why, Shane Meadows, why? This film was outstanding, it was on course for an easy 4.5 stars. I was loving it: brilliant use of music, great pace and a real energy/vibe to it. I mean, me enjoying a British black and white film set on a council estate about boxing. That never ever happens, I usually avoid all those aspects, but I gave this one a chance, I like Bob Hoskins and it looked interesting, and what do you do? You kill the ending and bring the whole film crashing back to misery land. Fuck you! I'm not saying every film has to end with sunbeams and rainbows over a chocolate landscape, but a film with this bleak an outset that was all about hope and strength NEEDED an upbeat ending. Moron! Idiot! Bastard!